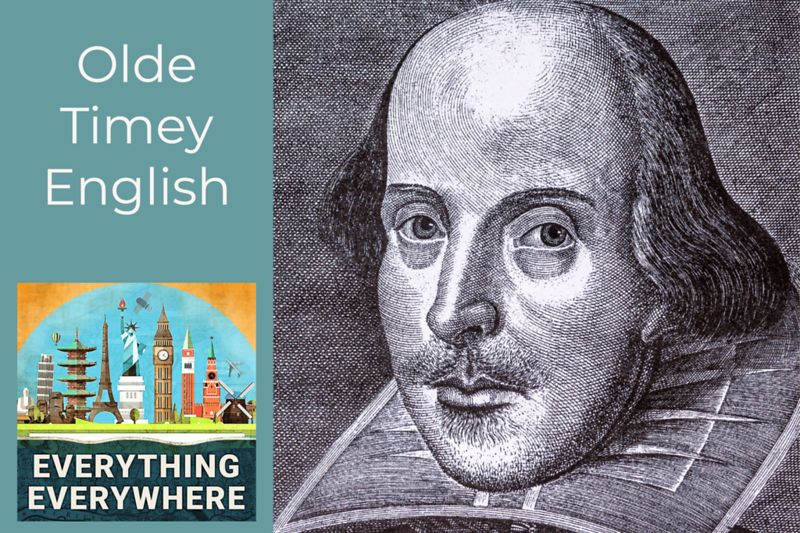 English is a very strange language. It is a Germanic language where half of the words come from a Romance language.

We have a host of words that make absolutely no sense in terms of spelling or pronunciation.

Perhaps strangest of all, some of the greatest literary works in the English language are filled with words that aren’t even in the language anymore.

Learn more about the English of Shakespeare, and how our language has changed, on this episode of Everything Everywhere Daily.

English is, in some ways, a very simple language. There are no gendered nouns like there are in German or Spanish. We have one simple indefinite article, “the,” and two definite articles with a simple rule for when to use them, “a” and “an.”

Napoleon once wrote an irate letter to Josephine because she used “vous” to him in a letter instead of “tu.”

German has the same thing. There is a formal distinction between “sie” and “du,” and when it is OK to use “du”, can be an issue between people.

English doesn’t have any of this. It doesn’t matter if you are talking to a president, a king, or a pauper, you call them all “you.”

While English eliminates many of these confusing elements from other languages, it didn’t always use to be that way.  In fact, you have probably encountered many of the vestiges of English in the form of the works of Shakespeare or older translations of the bible.

For example, if you ask most English speakers what the sixth commandment is, they will usually say, “thou shalt not kill.”

While it is only four words long, two of those words, “thou” and “shalt,” are not used in common English.

There are a host of words, including “thee,” “thou”, “thy,”, “thine”, and “ye”, which were all part of English centuries ago and all have fixed grammatical functions.

Let’s start with the word “thou.”

This didn’t use to be a problem with English.

“Thou” is explicitly a first-person singular form of “you.”  If I said “thou,” it would clarify that I was referring to “you” singular.

However, there was more to it. You might have heard of a Christian hymn titled, “How Great Thou Art.”

“Art” in this sentence is a second person singular form of the verb to be. So, it would be,

“Thou” affectes verbs beyond just the verb to be. In the sixth commandment example I gave above, “shalt” is just the second person singular version of “shall.”

In fact, for many verbs, they would often add an ending of -st or -est if it was used in conjunction with “thou.”

For example, “thou walkest to the store.”

However, there is more to it than that.

In English, for the most part, we don’t do that. However, we do, do that for pronouns.

In grammar, these are called nominative and accusative. Nominative words are the subject of the sentence. These include; I, he, she, it, they, and back in the day, thou.

Accusative pronouns would be; me, him, she, and them. The accusative version of thou would be thee.

An example would be:

I threw the ball to thee.

Thou threw the ball to me.

Today, if you hear the word “thou,” it sounds fancy. In fact, “thou” was the informal version of “you.”   You would use “thou” when talking to friends, family, and people in the same social class.

What was the formal version of “you”? Well, this is where it gets confusing, it was “you.”

You would address the King of England, for example, as “you” instead of “thou.”

Finally, just to cap off the discussion of “thou” we have to address the possessive form, which is the word “thine.”

This is used in the phrase, “to thine own self be true,” or I could say, “thine car is blocking my driveway.”

So, just to wrap up, in Shakespearean English, the second person singular would be thou, thee, and thine.

Thou art a podcast listener.

I record a podcast for thee.

You listen to this podcast on thine smartphone.

Ok, so what about the second person plural? This, too, is different.

If you are using it as the subject of a sentence, aka the nominative form, you would use the word “ye.”

Ye is referring to a group of people you are addressing.

Examples you might have heard of include “abandon hope all ye who enter’, or “oh, ye of little faith.”

Here I need to make things even more confusing. Back in Old English, before Shakespear even, there was an additional letter in the English language called “thorn.”  The thorn symbol was pronounced the same as “th”.

In Old English, it was written as an elongated lowercase p, but when printing presses started, they didn’t have that character, so they used the letter ‘y’ instead.

So, if you have ever seen a sign that says “Ye Olde Shoppe,” this use of “ye” is not the second person plural, but rather it is just the word “the.” So the sign would read, “the olde shoppe”.

Confused yet? I’m just getting started.

The accusative form of ye, when used as the object of a sentence, is just the word we are familiar with, you.  The exact same word which was used in the formal version of the second person singular.

The best example of this comes from the King James version of the bible. “And ye shall know the truth, and the truth shall set you free.”

Ye is the subject, and you is the object.

If you are wondering how we ended up using the word “you” for both singular and plural, you can sort of see why now.

Having explained the confusion of the word “you” being both singular and plural, I now want to loop back to something I alluded to in the beginning.

I mentioned the hymn titled “How Great Thou Art.”

Thou, in this case, is referring to God. In fact, in many of the early English bibles, God is often referred to using “thou.”

But, I mentioned that “thou” is the informal version and “you” was formal.

Given that, you’d think that the English translations of the Bible would refer to God as “you” rather than “thou.”

If this were the case then “how great thou art”, really should be, “How great you are”.

So what is the deal with that?

This is all due to one man, William Tyndale. Tyndale was one of the first people to translate the bible into English.

Because the word “you” had both a singular and plural meaning, he didn’t want there to be any confusion.

As he was a monotheist, he didn’t want anyone to assume that “you” could be plural and imply that there were multiple gods.

Therefore, he used “thou” because it was unambiguously singular, even if it was informal.

So, at this point, I think I’ve confused everyone. However, it isn’t necessarily that complicated.  To summarize here are all of the first and second person pronouns, singular and plural, as Shakespear would have known it:

So, if thou wishest to read Shakespear with a better understanding of what he was saying, then devote thy time to understanding the words of that period.

Understanding Shakespearian writing isn’t that hard once you get the hang of the words I’ve outlined here, as well as -st and -est to the ends of some verbs.

I will say that even thought modern English is less precise, just using “you” for everything is much less confusing.