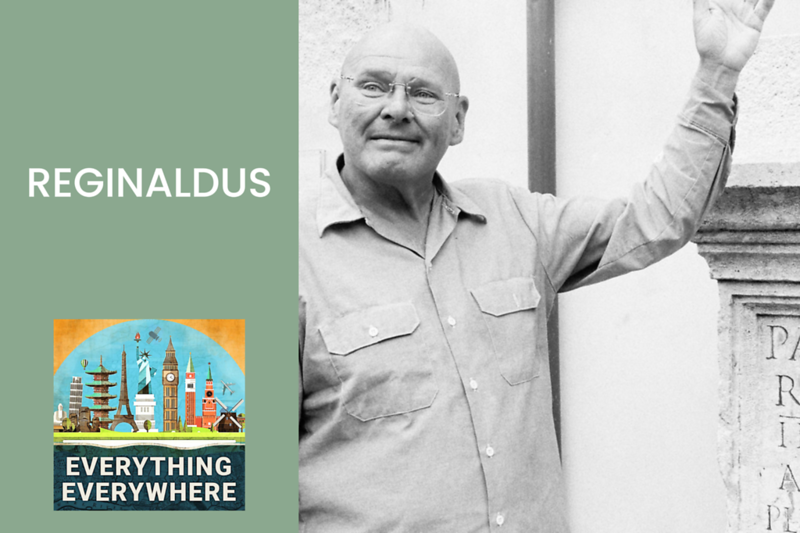 On Christmas Day, 2020, Reginald Foster passed away at the age of 81 in a nursing home facility in Milwaukee, Wisconsin. He had been diagnosed with COVID-19 a few days before.

This episode is not necessarily about his passing however, it is about his life, and in particular how he had one of the most unique jobs in the world.

Learn more about Reginald Foster, the world’s foremost Latinist, on this episode of Everything Everywhere Daily.

Today’s audiobook recommendation is Long Live Latin: The Pleasures of a Useless Language by Nicola Gardini.

What use is Latin? It’s a question often asked by those who see the language of Cicero as no more than a cumbersome heap of ruins, and something to remove from the curriculum. In this sustained meditation, Gardini gives us his sincere and brilliant reply: Latin is, quite simply, the means of expression that made us – and continues to make us – who we are. In Latin, the rigorous and inventive thinker Lucretius examined the nature of our world; the poet Propertius told of love and emotion in a dizzying variety of registers; Caesar affirmed man’s capacity to shape reality through reason; Virgil composed the Aeneid, without which we’d see all of Western history in a different light.

Technically, he was a friar in the Discalced Carmelite order, although you’d never guess it by looking at him. He never dressed like a monk or a priest. He didn’t wear a collar or a monk’s robe.

He created his own habit which was blue overhauls. He looked just like a plumber, which was exactly the point. He came from a family of plumbers and he took a vow of poverty which he took seriously.

The original monk wore the robes they did because that is what poor people used to wear. Over time, poor people stopped wearing such clothing, and the monks never changed. Today, a monk’s habit will cost more than regular clothes, and that is what Reginald objected to.

He had very few possessions. Everything he owned could probably fit into a bag, and he always slept on the floor.

His dress and sleeping habits, however, and not the focus of this story. Reginald was also brilliant.

He entered the seminary at the age of 13. He was not only extremely young, but he also managed to get the highest grade point average in the history of the seminary.

The subject he loved the most, and the one which he most passionate about was Latin.

At the age of 16, he was exchanging letters in Latin with cardinal Antonio Bacci, the Pope’s chief Latinist, and at the age of 20, he became a priest.

He wasn’t long for being a regular old monk.

In 1969 Monsignor Amleto Tondini retired as the head of the Latin Letters Office and the Vatican was looking for a replacement.

There really was only one choice. It was the brilliant Latinist from Milwaukee who looked like a plumber and slept on the floor. 30-year-old Father Reginald Foster.

It’s here I should describe what a Latinist is and what the job entails.

Latin is still the official language of the Catholic Church. It doesn’t mean that anyone speaks it as their first language, or that it is even spoken at all within the walls of the Vatican, but that all official documents are written and preserved in Latin.

This is a continuation of the way church documents have been preserved and written for centuries, even since the days of the Roman Empire.

A Latinist is someone who specializes or has expertise in Latin. As the Catholic Church is really the only institution on Earth that officially still uses Latin, that means that the Head of the Latin Letters Office is more or less unofficially in charge of the Latin language.

As the Latinist, he not only had to translate documents into Latin, but he often had to create words for things that didn’t exist in Latin. Modern things such as airplanes, computers, the internet, automobiles, and telephones didn’t have words in ancient Latin because the objects didn’t exist.

Likewise, he had to find ways of expressing things that might not be easily expressable in Latin, yet also had to be as accurate as possible.

In addition to papal encyclicals and other official documents, he also had to translate more mundane things. The ATM machines in Vatican City have an option for Latin and all of the Latin was written by Reginald.

He had a weekly program on Vatican Radio called “The Latin Lover” which talked about the Latin language.

He eventually served as the Head Latinist at the Vatican for 40 years. He served four different popes and was known as to the Swiss Guard, due to his dress, as the auto mechanic priest.

However, his role at the head of the Latin Letters Office was only his day job and arguably wasn’t his most important contribution.

Centuries ago, getting a higher education degree in Europe basically meant learning Latin and Greek. That was the core of any education because so much was written in those languages. Moreover, Latin served as the language of the church and it also served as a universal language for most of Europe.

Over time, the importance of Latin waned. French became literally the Lingua Franca for Europe, and that was eventually replaced by English.

Beginning in the 19th century, universities gradually ceased requiring Latin and Greek, as they were no longer relevant for modern research.

The church moved away from the Latin mass in the 1960s so even priests weren’t learning Latin anymore.

By the time the 1970s rolled around, the use and learning of Latin had reached an all-time low.

This is where Reginald stepped in.

He would wake up at 3:58 every morning, say mass in Latin, grade papers, then go to work at the Vatican. At 2:00 pm, he would then go to university to teach. He would teach 10 semester-long courses every year, at every experience level.

His greatest contribution to the study of Latin began in 1985 when he began providing summer Latin programs on his own away from the university. The course was eight weeks long and met seven days a week for eight hours a day.

Students had a heavy workload and they would often travel to places around Rome where historic events took place.

His students dubbed him the Latinized Reginaldus.

He never charged anyone a penny for any of the programs over the decades he ran his summer institute.

Reginaldus’ teaching methods were unique and successful. Learning Latin for centuries was very mechanical and dry. Go and watch the scene from Monty Python’s The Life of Brian where Brian writes graffiti in Latin to get an idea.

Reginald’s belief was that “Every bum and prostitute in ancient Rome spoke Latin.” therefore anyone could.

Many people wonder what’s the point was of learning Latin. After all, wasn’t it a dead language?

To Reginald, Latin was as useful for traveling as learning French or German. The difference was that with Latin, you could travel into the past.

Hundreds of people came through his summer institutes. Eventually, in 2005, the Gregorian University had to fire him, because he refused to turn down anyone who wanted to learn, regardless if they paid tuition.

Today, there is now a resurgent movement called Living Latin. In the past, many people who learned Latin might be able to read it, but they couldn’t speak it. Now, with new technology, there is a growing number of YouTube channels, conferences, college courses, and immersion programs that are done entirely in spoken Latin.

You can find clips of movies online which have been dubbed in Latin. All of the Harry Potter books have been translated into Latin. Duolingo has a free online Latin course. Netflix recently released a series called Barbarians where the dialogue of the Romans is in actual Latin.

Almost every Latin instructor in the world today can either directly or indirectly link themselves to Reginald Foster. It is hard to find any other individual who was responsible for single-handedly shaping an academic discipline.

He published his first Latin textbook Ossa Latinitatis Sola, in 2016. His second book was announced and placed on preorder just weeks before his death.

While the number of Latin speakers in the world today isn’t huge, the language also isn’t extinct. Much of this can be attributed to the work of one man.

Today’s five-star review comes from listener Rudy over at Podcast Republic. They write:

I really enjoy this podcast. The length is just right to be able to do dishes, fold laundry, or run a short errand, and learn something new. Thank you for making these mundane tasks something to look forward to!

Thanks, Rudy, and thanks to everyone who has left reviews of the podcast online and is a supporter over at Patreon.com. Remember, if you leave a five-start review, you too can have your review read on the show.