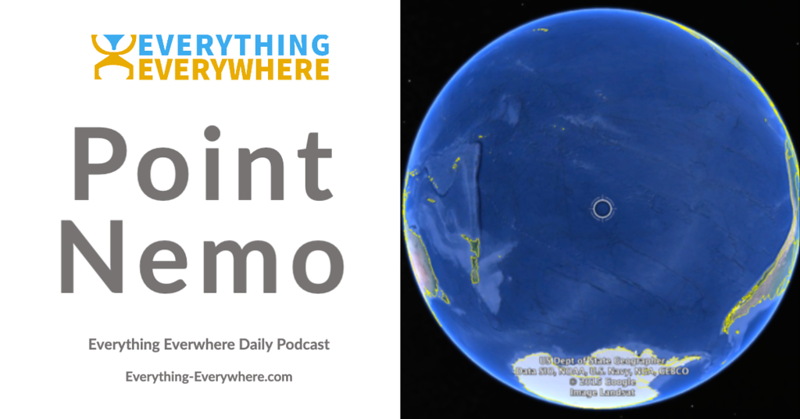 Then I have got the place for you. Point Nemo.

Point Nemo is literally the most remote place on planet Earth.

Learn more about Point Nemo and other poles of inaccessibility on this episode of Everything Everywhere Daily.

CuriosityStream has many original documentaries, including one of their latest, Return of the Wolves, which tells the story of wolves in Isle Royale National Park in Lake Superior, and the delicate balance of predator and prey with moose and wolves.

If you want to visit Point Nemo you will need a good ship and a GPS, because there is nothing about Point Nemo which will is special other than a place on a map.

Point Nemo is the point on Earth that furthest away from any speck of land.

Located in the southern Pacific Ocean, roughly between New Zealand and Chile, Point Nemo is 2,688 kilometers or 1,670 miles from Easter Island, Pitcairn Island, and Marie Byrd Land in Antarctica.

Unlike most discoveries on the planet, Point Nemo wasn’t discovered by someone on a ship. It was discovered in 1992 by Hrvoje Lukatela, a Croatian-Canadian engineer who programmed a geospatial computer program to find the place on Earth which was farthest from land.

He named the spot after Captain Nemo from the Jules Verne novel Twenty Thousand Leagues Under the Seas.

He has never visited Point Nemo himself.

The area around Point Nemo is perhaps the least biologically active place on Earth. Because it is so far from land, and the land it is next to are mostly tiny islands which are themselves isolated, there are few micronutrients which come from the land which make their way to Point Nemo.

The lack of fish, and its location far outside of major shipping lanes, means that no only is it far from land, but it is also the most isolated place on Earth because there are almost never any ships in the area. There is no reason for anyone to sail there because there is nothing there, and it isn’t on the way to anywhere else.

If you happen to go there to spend a day, the nearest human beings to you would be on the International Space Station, which would be 254 miles or 408 kilometers overhead.

In 2018 there was a ship which did pass through the area as part of an around the world sailing competition. As they passed through, they took a sample of the water that they brought back for later testing. They found that the water there had 26 particles of microplastic per cubic meter.

Because the area is so remote and has so few ships, it actually has it is purposes.

Most importantly, it is known as the spacecraft graveyard. Many countries will deorbit their satellites and make it so they crash in this part of the South Pacific. This section of the planet is the safest area to bring a satellite down where the odds of it hitting someone is minimized, as well as any potential environmental impacts.

In the world of fiction, the area around Point Nemo is where author H. P. Lovecraft said monster Cthulu came from in his short story “The Call of Cthulhu”.

That means that Point Nemo is just one of several poles of Inaccessibility on the Earth. None of these poles are actual physical things, they can only really be determined by figuring it out on a map. However, in a few cases, there are monuments that have been built to recognize the location.

The Northern Pole of Inaccessibility is the Point Nemo equivalent in the Arctic Ocean. It is not at the North Pole. It is actually located closer to Russia and is 1,008 km or 626 miles away from Ellesmere Island, Canada, and Komsomolets Island, and Henrietta Island in Russia.

Almost everything at the station has been covered in ice and snow. A team of explorers actually visited in 2007 and they were the first humans there in over 40 years. The only remaining thing from the station is a bust of Lenin which was built on top of a tower, and a few tops of radio antennas.

In 2007 snow had almost reached the bust of Lenin and it is possible that now the bust has already been partially or totally buried by snow.

The Southern Pole of Inaccessibility is considered to be significantly more difficult to reach than the actual South Pole.

There is some disagreement about the Southern Pole of Inaccessibility because there is a difference between its distance from sea ice and the open ocean.

Other continents have their own poles of inaccessibility. The Eurasian pole is located in Northwest China, not far from the border of Kazakhstan. It is 2,645 kilometers or 1,644 miles from the nearest coastline.

In North America, the Pine Ridge Indian Reservation in South Dakota is the furthest point from any coastline at a distance of 1,650 kilometers or  1,030 miles.

In South America, the pole is located near the town of Arenápolis in the Mato Grosso state of Brazil. It is 1,504 kilometers or  935 miles from the sea.

In Africa, the point is near the town of Obo in the Central African Republic which 1,814 kilometers or 1,127 miles from the coast. It is very close to the borders of South Sudan and the Democratic Republic of the Congo.

Finally, the Australian Pole of Inaccessibility is located about 130 kilometers west-northwest of Alice Spring in the Northern Territory. It is 920 kilometers or  570 miles from the sea.

The executive producer of Everything Everywhere Daily is James Makkala.

I have recently made the Apple Podcast charts in both of your countries and I’m really happy to have you on board.