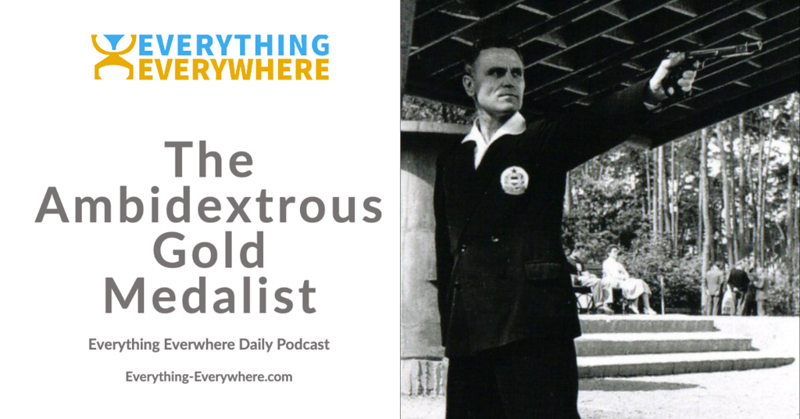 Learn more about this remarkable Olympic Medalist on this episode of Everything Everywhere Daily.

To check out the complete line of Scottevest products go to Everything-Everywhere.com/scottevest, or click on the link in the show notes.

Károly Takács was born in 1910 in Budapest, Hungary.

Like many men of his age he joined the army at a young age, and then quickly went up the ranks.

Unlike other men who joined the Hungarian military, Károly showed himself to be an extremely adept marksman. In particular, in pistol shooting.

By 1936, Károly was one of the best rapid-fire pistol shooters in the world.

I’ll deviate a bit here to explain how rapid-fire pistol shooting works. In the event, you have to hold the pistol with a single hand, with no support from your other hand. When I light goes on, you have a limited amount of time to fire five shots at five different targets. The time limits are 8, 6, and 4 seconds, and shooters will alternate between those times.  There are 60 shots total in a competition.

In 1936, Karoly was very much in contention for winning a medal at the Berlin Olympics. However, the rules of the Hungarian Olympic committee prohibited anyone but commissioned military officers from taking part in shooting events.

Károly was only a sergeant, so they denied perhaps their best shooter a place on the Olympic team.

After the Olympic, they changed their rules so that Károly could compete in the 1940 Olympics in Tokyo.

During a military training exercise, a defective grenade blew up in Károly’s right hand. His shooting hand. It was so mangled that he was unable to hold a pistol any more.

In the spring of 1939, Károly appeared at the Hungarian national shooting championships. The rest of the competitors were glad to see him. Everyone had heard about his injury and no one had heard from him since. They were happy to see him again and were pleased that he had come out to support the time.

The only problem was that Károly hadn’t come out to support the team.

He told them, “I’m not here to watch. I am here to compete.”

In an interview, he was quoted as saying, “Why should I worry about the right hand I do not have. Let me see what I can do with the left hand I have.”

He won the Hungarian National Championship using his left hand in competition for the first time ever.

He was a member of the team which went on to win the 1939 world championships.

Of course, something else happened in 1939. A little thing called World War II started in Europe and resulted in the 1940 Olympics being canceled.

…and the 1944 Olympics were canceled as well.

By the time the 1948 Olympics finally occurred, Károly had missed three consecutive Olympics due to rules and war, plus had most of his shooting hand blown off in a grenade accident.

He was 38 years old and one of the oldest competitors in the event. When he arrived in London, the reigning world champion Carlos Enrique Díaz Sáenz Valiente from Argentina asked him why he had come. Károly replied, that he had come to learn.

Károly ended up winning the Gold medal and topping the world record by 10 points.

While up on the medal stand, the silver medalist Valiente whispered to him, “I think you’ve learned enough.”

Károly still wasn’t done. At the 1952 Olympics in Helsinki, he competed, again and again, won the Gold medal, becoming the first person ever to win two gold medals in the event.

At the age of 46, he returned qualified for the 1956 Melbourne Olympics, this time only taking 8th place.

After Melbourne, Károly retired and became a shooting coach.