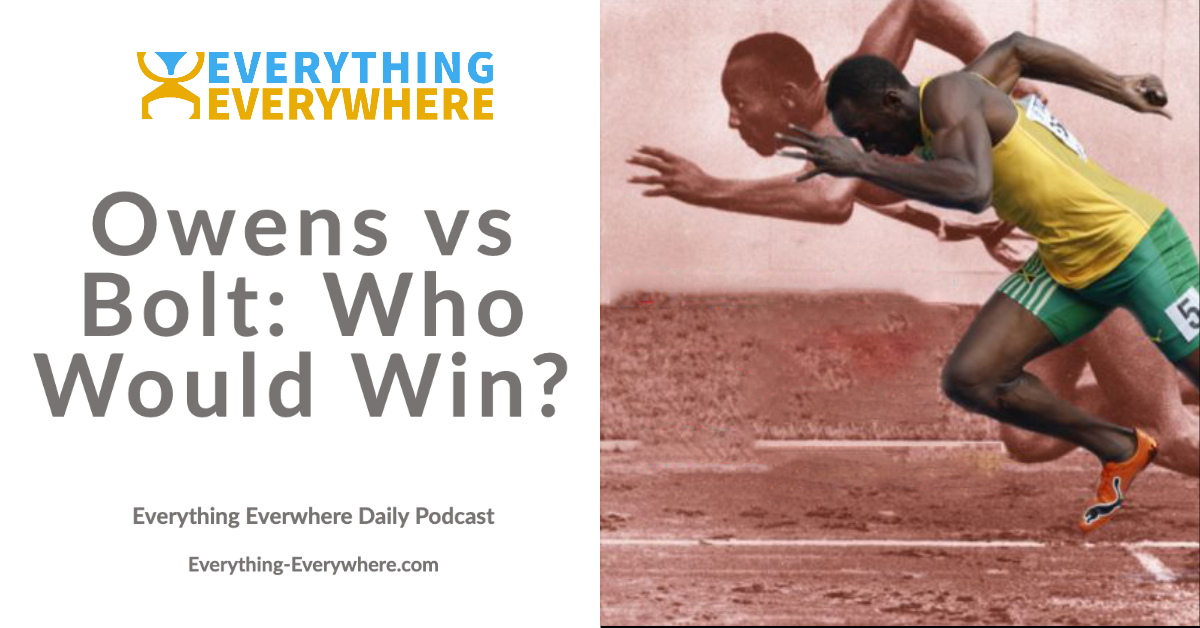 Jessie Ownes was the world record holder in the men’s 100m dash and won the gold medal at the 1936 Olympics. He is famous for winning 4 gold medals in one Olympics and foiling Hitler’s plans for the Berlin games. His 100m world record stood longer than anyone else’s in the event.

This episode is going to try and answer an impossible, yet interesting question: who would win in a race between Jessie Owens and Usain Bolt?

You might think the answer is obvious, but the truth is anything but, as you will find out on this episode of Everything Everywhere Daily.

When doing comparisons across time with athletes, there are always major difficulties. This is always an issue when trying to compare baseball players because there are so many variables you have to account for.

The reason why I want to focus on these two athletes is that the 100m is a very simple event. You run quickly over a short distance, and that’s it. So it should be relatively easy compared to other sports to do a temporal comparison between athletes.

Also, I could have picked almost any two-track stars to make this comparison, but these two men are both very well known and are far enough apart in time that the differences between them are much more glaring.

So with that, let’s start the discussion with their personal best’s for each athlete.

Jessie Owens’ personal best in the 100m was 10.2 seconds which he set at the NCAA championships in Chicago in 1936.

Usain Bolt’s personal best was 9.572 which he set in Berlin at the 2009 world championships.

So at first glance, this is a real easy debate. 9.572 is much faster than 10.2, so the debate is settled. If their personal bests were run during the same race, Jesse Ownes would have been 14 feet, or 4.2 meters behind Usain Bolt when he crossed the finish line, which is a huge difference in the 100m. Jesse Owens couldn’t even qualify for the Olympics with a time like that today.

If only it were that simple.

There is a lot that you have to consider when evaluating these times, especially the conditions which Jesse Owens had to run under.

Let’s start out at a meta-level with the conditions they had to work under.

Back in the 1930s, training regimens weren’t very sophisticated. The science behind achieving optimal performance was really more guesswork than anything else.

Jesse Owens was attending college at Ohio State during the peak of his athletic success. While he was competing for Ohio State, despite unquestionably being the best athlete in the country, he did not receive an athletic scholarship because of his race. In addition to taking classes and training, he had to work part-time jobs to pay for school. He also was not allowed to live on campus, so he had to spend a good part of his day going back and forth between his home, work, and campus.

When the team traveled, Jesse wasn’t allowed to stay or eat with the team. He had to stay in hotels and eat in restaurants which only catered to blacks.

In the 1930s, one’s amateur status was taken very seriously. You couldn’t make as much as $1 in endorsements or for taking part in any athletic competition. After the 1936 Olympics, he had to drop his amateur status so he could take advantage of endorsement deals and earn money.

Today, an athlete like Usain Bolt can earn money and endorsements from the start of his career, and not have to worry about amateur status. He can be a professional track athlete and focus all of his energy on being the best competitor he can be.

It wasn’t until 1986 that professional athletes were allowed to compete in the Olympics. Before then, many athletes would only have one good Olympics before they had to quit to get a job, even if they could physically have competed for years more.

Bolt also has professional coaches, using state of the art equipment, to perfect his technique, and to get his body into perfect shape.

So before we even begin looking at specifics, we can see that Usain Bolt was able to train at a higher level, and had an entire career where he was able to focus on track, whereas Jesse Owens really had to treat athletics like a part-time job, with a great many other difficulties and social obstacles he had to overcome.

Next, let’s look specifically at the conditions which they had to run under.

We’ll start with the track itself.

The tracks that Jesse Owens had to run on back in 1936 were made out of cinders. Cinders, as in what is leftover after wood is burned. All tracks at the time had a cinder surface, and they were used at every Olympics through 1964.

There are very few cinder tracks in the world today, and most of them are mostly used for horse racing.

The problem with cinder tracks is that they absorbed a lot of energy, robbing runners of speed. It is no coincidence that the first sub 10 second time in the 100m came in 1968 at the Mexico City Olympics, which was the first Olympics not to use a cinder track.

Tracks today are modern synthetic creations designed to let athletes run as fast as possible. If you’ve ever been on such a track, you’ve probably noticed how much energy it gives back. It is like running on a rubber surface.

Experts have estimated that the difference between running cinders vs a synthetic track is about 1.5% to 2%.

Just the track alone would shave about 0.2 of a second off of his time, bringing his personal best down to a flat 10 seconds.

Next, we have to consider that Jesse Owens didn’t use starting blocks.

Owens just missed the starting block revolution in sprinting which started in 1937, the year after his gold medal. It was then that starting blocks became mandatory so everyone had an equal start.

Owens carried a gardening trowel with him that he used to dig small holes in the cinder track for his feet. In fact, he had a lucky trowel that he brought with him to all his track meets.

Estimates I’ve seen said that over a distance of 100m, the lack of starting blocks could add anywhere from 0.1 or 0.2 seconds to the time of an elite sprinter.

Finally, we have to consider the shoes they were wearing.

Usain Bolt had an elite contract with Puma who has engineers working on creating the highest performance running shoe in the world.

Jesse Owens did wear top of the line shoes for his time. In fact, Adolf Dassler, the founder of Addidas, reached out to Owens before the 1936 Olympics to give him his shoes to compete in because he wanted to grow his new company. Owens wore a pair of handcrafted leather running shoes with extra long spikes.  It should be noted that Dassler at the time was a card-carrying member of the Nazi Party.

Even though Owens wore 1936 state of the art shoes in the Olympics, they were still a far cry from the athletic shoes with rubber soles which would be developed decades later.

How much of a difference do the shoes make? It is hard to say, but you could be talking about another 0.1 to 0.2 seconds.

There are also other miscellaneous things that can make a difference with speed.

Today, all the timing is done electronically. Usain Bolt’s world record time was measured down to the thousandths of a second using computerized systems. Jesse Owen’s time was done by hand using a stopwatch. It is entirely possible that a full tenth of a second, or at least a few fractions thereof, could have been taken off the time he actually ran if it was measured more accurately.

Also, every competitor in a race now has a speaker behind their starting blocks, so everyone can hear the starting gun at the exact same time. This is also a few theoretical hundredths of a second which might come into play.

All of these things were actually put into a test that was run by the CBC in Canada. They got Olympic sprinter Andre De Grasse to run under similar conditions as Jesse Owens.  De Grasse was a bronze medalist at the 2016 Olympics in the 100m and has a personal best time of 9.9 seconds. Owens and De Grasse were both of similar height and weight.

For the experiment, they created a pair of shoes similar to what Owens wore and had him run 100m on a track made of packed dirt. He also had to dig holes for his starting blocks as Owens did and they also hand-timed it using a stopwatch.

How fast did he run under these conditions? He ran the 100m in 11 seconds, a full 1.1 seconds slower than his personal best. Moreover, at the end of the sprint, he said he was more tired than he had ever been after running 100m, and this guy was an Olympic Medalist.

So, would Jesse Owens be able to beat Usain Bolt if they were running under equal conditions?

David Epstein, the author of the book The Sports Gene, concluded:

Biomechanical analysis of the speed of Owens’ joints shows that had been running on the same surface as Bolt, he wouldn’t have been 14 feet behind, he would have been within one stride.”

My conclusion is pretty similar. If you factor in everything Jesse Owens had working against him, he comes out being one of the fastest men in history. Only 9 people in history have ever run the 100m faster than 9.8 seconds, and I think Jesse Owens would be one of them if he had modern conditions.  It is possible he could have run a sub 9.7 which has only been done by 3 people in history.

In the end, however, Usain Bolt is a unique physical specimen. Bolt is 6’5” whereas Owens was 5’10”. The number of strides Bolt requires to run a race is less than almost any other elite sprinter in history. Even factoring in everything Owens had working against him, it’s enough to make the race close, but Bolt would still come out ahead in the end.