In August of 2012 I attended the Book Passage Travel Writing Conference and had the pleasure to meet Jeff Greenwald. He was introduced to me as being the world’s first travel blogger. Needless to say I was intrigued by this claim.

As it turns out, he does indeed have a pretty solid claim on being the first travel writer to post a story on the world wide web back in January 1994. While some academic from CERN or the Univesity of Illinois might have updated his website overseas, I’m pretty certain that Jeff was probably the first travel writer to actually submit a travel story via the world wide web as his first post was less than a year after the first release of the Mosaic browser. I thought Jeff’s story was fascinating and a great insight to how the world of travel blogging came about.

In early 1993, I decided to try an experiment that seemed utterly insane.

For the past 14 years—since 1979—I’d been working as a photojournalist. My assignments had taken me around the globe, but in spite of all the miles I’d flown I didn’t feel like much of a real traveler. In truth, I felt like I was somehow … cheating.

It isn’t hard to say why. It was a result of flying itself. Airports are the great, bland equalizers of civilization; arriving in every new country, from Turkey to Thailand, felt exactly the same. Travel itself, which had seemed so thrilling and exotic when I’d started out, had become tame and predictable. The whole world, in fact, was feeling freakishly small.

The experiment grew out of my desire to rediscover that I was actually living on a moderately large planet. And so I put together a scheme (also known as a book proposal) designed to totally change my point of view. To celebrate my 40th birthday I would hoist on a backpack, walk out of my Oakland, California flat, and circle the globe by land and sea—never setting foot on an airplane.

Such a journey, I imagined, would re-awaken the fantasies that had inspired me to become a travel writer in the first place: my curiosity about the infinite variety, immensity and secrets of my home planet. It would be a worthy challenge; an odyssey of trials and triumphs, far outside my boarding gate comfort zone.

My agent was able to sell the proposal. Within a few months—with a mixture of ecstasy and terror—I signed a contract to write my book. It would be called The Size of the World.

Ten days before Christmas, 1993 — less than two weeks before my date of departure — I was contacted by an editor at O’Reilly Associates in Sebastopol, California. O’Reilly was (and still is, as O’Reilly Media) a well-established publisher of software and computer books; they’d also made forays into the world of travel literature. My writing had already appeared in a few of their wonderful Travelers’ Tales collections.

Greeting the editor, I expected a vague request that I “keep my eyes open” and write a few good stories. What he had in mind, though, was much was more daring. O’Reilly Associates, he told me, had just opened a new site on Internet: that mushrooming electromagnetic labyrinth of on-line singles clubs, Grateful Dead databases and other hyper-specific peer-interest groups (e.g., African Americans for the Metric System) that was beginning to define, for better or worse, the polis of the future. The name of O’Reilly’s new site was called the Global Network Navigator (GNN). Their online “Travelers’ Center,” they assured me, was going to be the hottest thing in travel since Lomotil.

“What we’d like you to do,” the editor said, “is write a column for us— from the road. Your stories can be as short or as long as you like, and you can write them whenever you want to. We’ll publish them on our Internet site, where people can read them as you travel. No pressure, no deadlines and — Sorry! — no money. But we think you’ll get great exposure, and it might open up a whole new audience for your book.”

There was more. The GNN Travelers’ Center, he told me, would try an innovation that sounded almost miraculous at the time. They would actually post a map on their website, showing the locations around the world from which I had sent back posts. People would be able to click on the city – and read the story I’d written from that location! This was wild. It was amazing. I contemplated the prospect of hundreds, thousands of Cheeto-scarfing Internet hounds tearing themselves away from their Star Trek forums to read about my Tenochtitlán tapeworm.

It would be lots of work, but they sold me on the idea. There was still enough mystery to the Internet—and enough evidence that it might actually be the beginning of something really big—to get me interested.

Still, I had to admit there was something subversive about the gig. Here I was, setting off to discover—in the most physically painful way possible—the hugeness of the planet. But even in 1993, it wasn’t just airplanes that were making the world seem small. Cell phones, satellite TV, fax/modems and email were playing their part as well. This, then, would be the paradox of my trip: While my body was creeping around the Earth like an inchworm, my brain would be shuttling along at the speed of light.

I agreed to do it. The only problem, then, was hardware. If I was going to be sending back stories from various global backwaters, I’d need a computer small enough to carry in my daypack. It had to (1) have a long battery life, (2) very few moving parts, and (3) be tough enough to put up with backpack travel.

Today, there are hundreds of lightweight notebook computers and portable devices we can choose from. In 1993, though, finding a “superportable” machine was next to impossible. After considerable research, though, I found my baby. Produced by Hewlett-Packard, it was called an OmniBook 300. Aside from its basic miraculous virtues (like a cute pop-out mouse, and a total weight of 2.9 lbs), it had one particular feature that sealed the deal. If worse came to worst, and the rechargeable cell died in the middle of a trans-Saharan trek, the OmniBook would run for about five hours on four AA batteries! (Even now, that seems very cool.)

I called Hewlett-Packard, told them what a big shot I was, and asked them to send me a “demonstration” unit on the double. 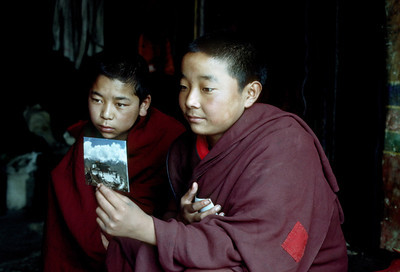 Forces were marshaled. GNN representatives wrote letters, my publisher made a personal plea, and Wired magazine, which had been using my work since their third issue, promoted me to Contributing Writer (a position withdrawn several years later, when Condé-Nast bought the magazine).

This did the trick. In late Fall of 1993 a UPS courier arrived at my door, and handed me a slim box containing, among politically correct non-Styrofoam peanuts, my very own OmniBook on six-month “editorial loan.” That same afternoon an HP product reviews coordinator phoned me up, confirming my receipt of the unit and offering a few words of professional advice.

By this point my relationship with GNN was honed to a single point man: Allen Noren, my liaison with the Travelers’ Center. A few days before my departure, sensing my 11th-hour panic, he raced down from Sebastopol to familiarize me with the maddening series of keystrokes and commands needed to “link me up” with O’Reilly headquarters in Sebastopol.

There is no need to re-create my technical education, an approximation of which can seen by renting The Miracle Worker. After two all-day sessions I was able to perform a simple email-to-fax transfer without biting my own teeth.

In mid-December, Noren came by to see me off. As he was leaving my flat, he paused. “I almost forgot,” he said. “Have you got a name for this Internet column of yours?”

Indeed I did. “Let’s call it Big World.”

And so it was. The name Noren and I didn’t have, of course, was what a “column” of this sort would eventually be called: a blog.

During the next nine months, I slogged my way plaintively around the globe. My around-the-world overland voyage would take me through 27 countries, and cover nearly 30,000 miles, before I returned to Oakland—crossing the Pacific aboard the Hapag-Lloyd container ship Bremen Express.

Sending back those dispatches was rarely easy. I often spent days trying to figure out where and how to upload my OmniBook Word files. Sometimes – say, in Oaxaca and Istanbul – local teams of tech experts, or even the top brass from the local telecom bureaus, would help me figure out how to navigate finicky modem lines or antiquated communications systems. Everyone seemed excited by the project, though many thought it made more sense to send postcards. 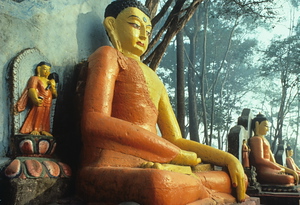 I was often inclined to agree. Quite often, getting those dispatches out into the ether meant leapfrogging technologies, and cobbling together a crazy collage of machines. One crazy afternoon—during the 11-day passage from Brooklyn to Dakar aboard the Ursus Delmas—I decided to send a dispatch from the ship. My story was written by hand, transcribed onto a teletype machine (the kind that punches holes in a ribbon), transmitted to the Ursus shipping headquarters, faxed to GNN, and converted into a digital file for my Big World site.

Other times, the bottleneck was transmission speed. I’m not talking about a few dull minutes. By June 1994, I had made it to Asia. Working with the gleeful and brilliant Sanjib Bhandari (then known as “The Bill Gates of Nepal”), we uploaded the first picture ever sent through the Internet from Kathmandu: a colorful image of elephant-headed Ganesh, the Hindu god of auspicious beginnings. Transmitting the small picture took the technicians at Bhandari’s state-of-the-art computer center nearly 14 hours.

During the nine month trip I wrote 19 “blogs” in all—from locations that included Bamako and Tangier, Istanbul and Kathmandu, Lhasa and Hong Kong. Thousands of readers logged on to the GNN Travelers’ Center to read about my adventures (that was a lot in 1994!). Some dispatches also appeared in the San Francisco Examiner, and in Wired. And many people actually seemed to realize that these dispatches were the harbinger of what would become, a dozen years later, a global viral art form.

When The Size of the World was released in hardcover in 1995, it was briefly a best-seller; a starred review in Publishers Weekly called it “a travel book like no other,” and a lot of other nice things. But somehow, the process of my trip – going around the world without airplanes – overshadowed its most unique accomplishment: the creation of the world’s first international blog.