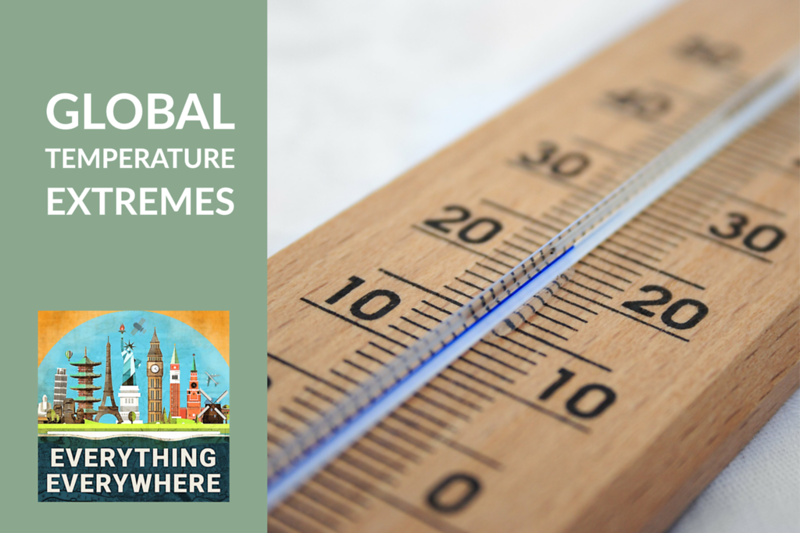 Every so often you might hear something on the news about a record high or low temperature being set. Usually, these might be records for a particular month, or maybe for a particular place.

Learn more about global temperature records, and how they are measured and verified, on this episode of Everything Everywhere Daily.

I’ve told you before about how Skillshare has thousands of videos on practical skills like learning video editing or playing an instrument.

But they also have tons of videos to help you with general knowledge. They have videos on weather 101, dieting and nutrition, or even how to get better sleep.

The keeping of temperature records only dates back to 1880. That was when the World Meteorological Organization began keeping records. The organization was originally established in 1873 as a forum for countries to share weather data, but today it is an agency under the United Nations.

Early weather observations weren’t necessarily bad or wrong, but they also weren’t necessarily very accurate or precise. Most early temperature recording keeping wasn’t intended for the purpose of advanced meteorology. It was simply a log that was kept at a military base, or by some private citizen.

Super high temperatures almost always occur in a desert, in the summer, in the middle of a heatwave. Super low temperatures will usually occur in extreme latitudes and somewhere far away from the sea, as large bodies of water tend to moderate temperatures by serving as a heat sink.

To illustrate some of the problems keeping temperatures, let’s take a look at what used to be the global record high temperature.

Most people might just hear that fact, and that’s that. However, when this record was investigated by the World Meteorological Organization, there were a whole bunch of problems.

The documentation of the record was nothing more than a daily temperature log kept at an Italian military outpost. It wasn’t until years later that anyone noticed that it was any sort of record, and there was nothing special about the temperature which was indicated at the time of record.

The actual log where the temperature was recorded is available online, and if you look at it, you can see an obvious problem. Just a few days before the record was set, someone new, and we have no idea who the person was, began doing the recordings.

Not only was the handwriting different, but they had screwed up the columns where they put the daily high and low temperatures.

All you have to do is look at the end of the day to see where the metal bars are and you can record the daily high and low temperatures. That is, you have to measure where the bottom of the metal bar is because that is the part that touches the mercury.

It appears that the solder who took the reading, who messed up the high and low-temperature columns, probably was reading the top of the bar, not the bottom. That could result in a massive 7 degree Celsius or 12.6-degree Fahrenheit difference in temperature.

Soon after this temperature became public, some meteorologists began to question it.

For starters, it is very unusual for such a high temperature to be recorded so close to the sea. As I mentioned before, the ocean tends to moderate temperatures.

Second, none of the other weather observation stations around Aziziya recorded anything close to what they did.

In the 1950s, the Libyan weather service actually came out doubting the temperature, and it was officially invalidated in 2012.

That made the new record high temperature a recording from 1913 in Furnace Creek in Death Valley, California. That record is 56.7 °C or 134.1 °F.

However, this temperature also had a lot of controversy surrounding it and many people think that it is 2.2 to 2.8 °C  or 4 to 5 °F too high.

Officially, an air temperature recording is measured at 1.5 meters or 4 feet 11 inches off the ground, and it has to be in the shade. That is why you’ll often hear about temperatures being taken “in the shade”.

The third type of temperature measurement is satellite measurements. Obviously, you can’t have thermometers everywhere on the surface of the Earth. Satellites can cover more of the Earth, but their temperatures aren’t considered as reliable. The highest temperature recorded by satellite was recorded in 2005 in the Lut Desert in Iran. It recorded a whopping 70.7 °C 159.3 °F.

It mostly has to do with its elevation and its location. It is 282 feet below sea level. Unlike other places on Earth that are below sea level, Death Valley is surrounded by high mountains. The mountains trap heat in Death Valley and it just circulates and keeps getting hotter.

If you ever visit Death Valley National Park, which I highly recommend, you can stop at the Furnace Creek Visitor Center and see where they take their temperature readings.

I mentioned earlier how the sea can mitigate temperatures. The fact that illustrates this better than anything else I can think of is that if you rank all of the US States and territories by their highest temperature ever, the state with the lowest high temperature is, believe it or not, Hawaii. Even Alaska has had a higher temperature than Hawaii.

So far I’ve only talked about high temperatures, but there of course records for low temperatures as well.

The coldest temperature ever registered at a recording station was taken on July 21, 1983, at the Soviet Vostock Research Station in Antarctica.

Vostok Station is the opposite of Death Valley in that it is the perfect place for ultra cold weather.

On top of all that, Vostok station is sitting at an elevation of approximately 3,500 meters or  11,500 feet.

There is one final observation I’ll make about temperature extremes.

We haven’t really been recording temperatures for that long in the big scheme of things. Even if we include the 1913 Death Valley record, that is only a little over 100 years ago. There weren’t even serious research stations in Antarctica until after WWII.

That means that all of our records are really only records from the modern era. It’s highly unlikely that the high and low temperatures we’ve recorded over the last 100 years are the highest and lowest temperatures that the Earth has seen, even within the last several thousand years.