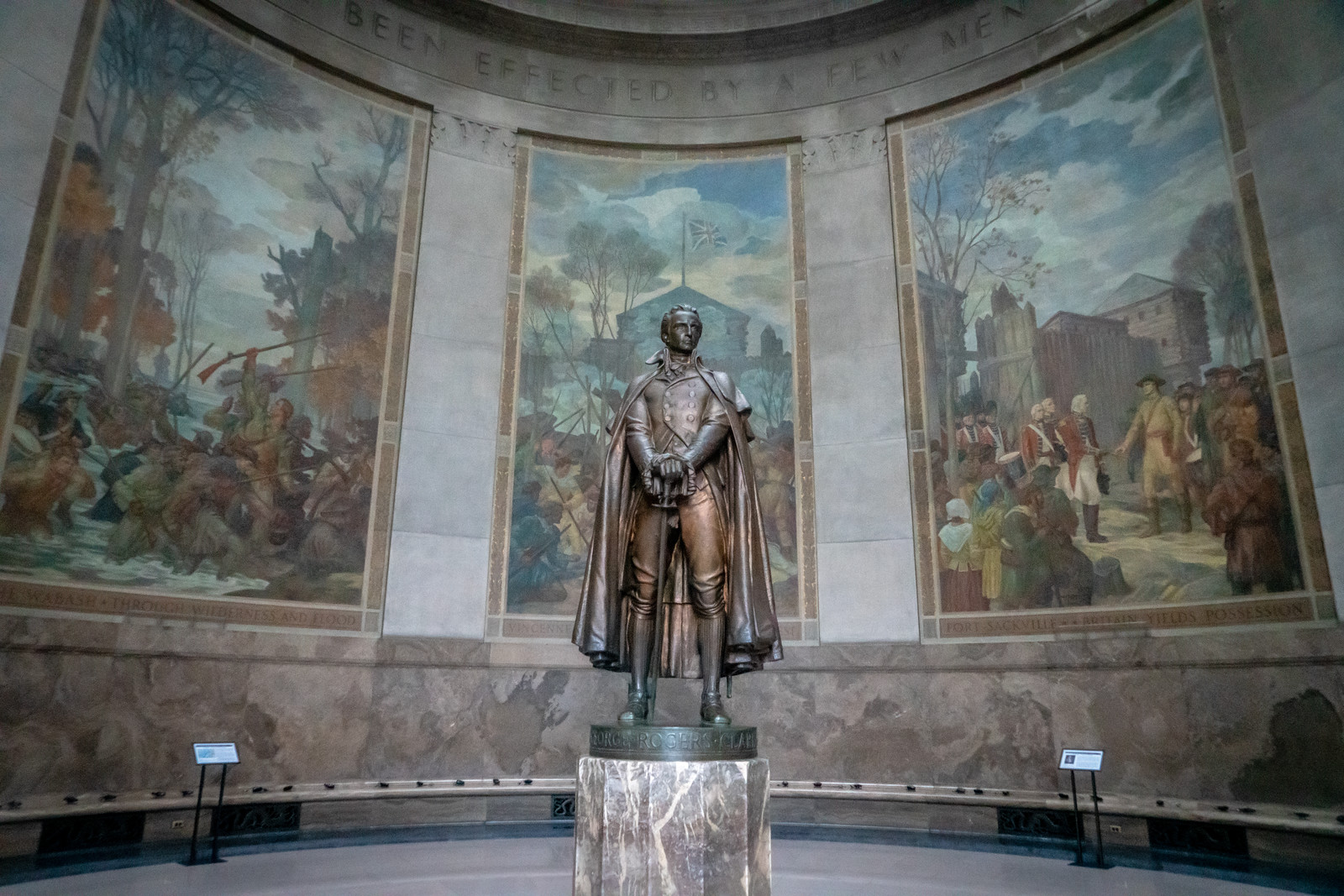 The George Rogers Clark National Historic Park commemorates George Rogers Clark, the man who led several of the most successful and famous military actions in the western theater of the Revolutionary War. This National Park Services site is located in Vincennes, Indiana which was the location of his most famous victory, when he and a small band of men captured the British Fort Vincennes during a daring winter raid.

The capture of Fort Vincennes eventually lead to American control of what was then known as the “west” and today is known as the midwest.

During the Revolutionary War, Indiana and Illinois were on the frontier. The Spanish, French, and British all still vied for control of the region, which today is known as the midwest. In December 1777 he proposed to lead a secret mission to capture the British forts at Vincennes (IN) and Kaskaskia (IL). He was given approval for the mission by Virginia Governor Patrick Henry. Secrecy for the mission was so tight that the men he gathered didn’t know what their objective was until they were underway.

After capturing the fort at Kaskaskia on July 4, 1777, he led his troops to capture Fork Sackville at Vincennes in February 1779.

The British troops holding the fort were not expecting a winter attack, especially considering that there was serious flooding on the Wabash River that year. Clark and about 170 men had to wade through freezing cold flooded river water for several days to reach the fort. They went without food for the last two days of the trek.

Clark began the assault of the fort in the evening of February 23, using deception to convince the British that the Americans had more troops than they did.

In the 1930s the state of Indiana decided to create a memorial to George Rogers Clark to commemorate his capture of Fort Sackville. The cost of the project at the time was $2,500,000 and it was dedicated on June 14, 1936, by President Franklin Delano Roosevelt. The memorial became part of the National Park Service in 1966 and today is one of three NPS sites in the state of Indiana.

George Rogers Clark is the older brother of William Clark, of the Lewis and Clark expeditions.

The site is quite small so there isn’t a whole lot to do within the park itself.

To get a real feel for the place, the first place to stop is the visitor center. I’d highly recommend watching the video. The story of George Rogers Clark and the capture of Fort Vincennes is not a story well known to most Americans and I came away fascinated with the story and wondering why I hadn’t heard more about it before.

The other main thing to do is to visit the memorial itself. This park holds a rather large memorial and it’s on a par with the type of memorials you might see on the National Mall in Washington DC. It was built during the New Deal and has the same architectural style that you will see at the Jefferson and Lincoln Memorials.

Inside the memorial are a statue of George Rogers Clark and a series of seven murals on the walls.

The murals were created by painter Ezra Winter which depicts scenes from the march and capture of Fort Sackville.

The bronze statue was the creation of Hermon Atkins MacNeil.

The park is quite small and the photography options are pretty simple. My biggest recommendation would be to have a wide angle lens with you inside the memorial, as there isn’t a lot of space inside. You will capture more of the inside of the memorial, the wider the lens you have.

Also, beautiful trees blossom just outside the memorial. If you visit during the spring, there’s a good chance you’ll be able to photograph the outside of the memorial with the trees in full bloom. I visited the George Rogers Clark Park in early April and the trees were barren at that time of year.

Vincennes is a small town but has many restaurants to choose from, thankfully. The areas off of the exit on highway 41 have many restaurants, as does the downtown area. There is no food sold at the park itself, so pack a picnic if you plan to enjoy the grounds, and bring water in the summer.

*NOTE* The park is located in the Eastern Time zone. It can be confusing because the other two national park service sites in Indiana are in the Central Time Zone, even though both of them are further east than George Rogers Clark. This means if you are doing a road trip to visit park sites in Indiana you have to factor time zones into your visit.

School groups will often arrive on weekdays around 10 am, so you might want to plan your visit to arrive earlier or later to avoid large groups of kids.

The closest hotel to the park is the TownePlace Suites by Marriott Vincennes. It is less than a mile from the park, and it’s where I stayed during my visit—it’s a great option and has all the amenities you would expect.

The other hotels in Vincennes are all lower cost chain hotels, so you can easily stay at a favorite standby. These include:

The park does not offer facilities for camping. There are two nearby sites where you can camp:

Vincennes is serviced by the Lawrenceville–Vincennes International Airport which is located nearby across the border in Illinois. However, it does not have regular commercial flights.

The closest airport with commercial flights is the Evansville Regional Airport (EVV), which is located approximately 46 miles from Vincennes.

Renting a car is the easiest option, and there are several easy options to rent a car directly at Evansville Airport, and then you can easily drive to Vincennes.

Buses are the only public transportation option to get to Vincennes. There is a Greyhound bus station in the city and it’s connected to the wider Greyhound system.

There is no admission fee to enter the park.

The park stamp for George Rogers Clark National Historical Park is available inside the visitor center. 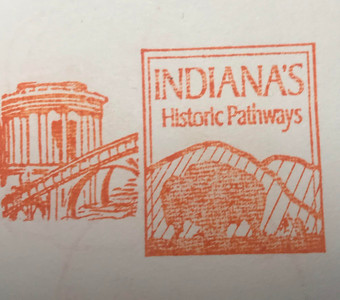 The George Rogers Clark National Historical Park is located in Knox County in southern Indiana, across the border from Illinois. The winters are not too extreme, but you should expect snow during winter months.

Low temperatures can be below freezing from December to March, with high temperatures in the high 80’s F (low 30’s C). View seasonal weather data for Vincesses.