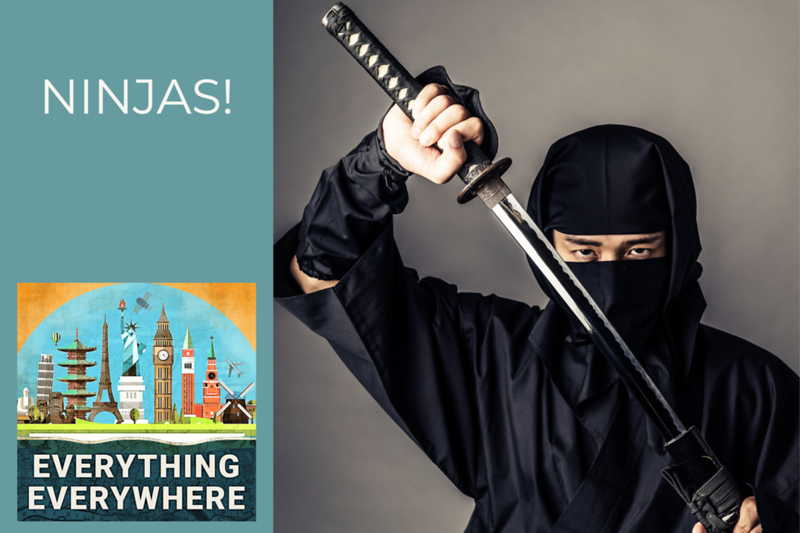 Ninjas are awesome. They’re silent, they can turn invisible, and they can totally flip out and kill people, especially their mortal enemies…pirates.

…or at least that is what popular culture would like you to believe.

Were ninjas really as powerful as they are made out to be? Were they the ultimate silent assassins?

Learn more about ninjas, real ninjas, on this episode of Everything Everywhere Daily.

The first thing you need to know about ninjas is that they weren’t even called ninjas. The Japanese actually called them Shinobi, which was short for shinobi-no-mono. Shinobi basically means to hide, and shinobi-no-mono would mean “a person who hides.”

The word ninja actually came from a Chinese pronunciation of the Japanese kanji characters, which make shinobi.

For the rest of this episode, I’m going to be using the term ‘ninja’ because that is what everyone is used to.

The origin of ninjas is shrouded in history. There are stories that go back quite far, but it is impossible to tell if they are real. There is one tale that says the ninja came from a demon that was half man and half crow.

The development of the skills that make up the art of ninjutsu, the martial art practiced by ninjas, originated between the 7th and 10th centuries.

A major change in Japanese military strategy started at the beginning of the 10the century when the Tang Dynasty in China collapsed, and many Tang generals fled to Japan.

They brought a more realistic philosophy of war to Japan, which was heavily centered around winning at any cost, more than traditional Japanese ideas of honor.

This blending of Chinese and Japanese tactics led to the development of ninjutsu. For several centuries it was an underground culture without any written rules of conduct.

The formal development of ninjutsu was created by a former samurai named Daisuke Togakure. Daisuke was on the losing side of a conflict and lost his lands and title.

Normally, according to the bushido code, Daisuke would have to have committed seppuku and taken his life. Instead, in 1162, he wandered into the mountains and renounced the bushido code.

It was in the mountains that he came across a Chinese warrior-monk by the name of Kain Doshi.

Together they created the discipline known as ninjutsu.

Ninjutsu isn’t a martial art in the same way that karate, judo, or taekwondo are. Ninjutsu was designed to be more of a type of unconventional guerilla warfare.

Ninjutsu covers a wide variety of subjects. It encompasses espionage, infiltration, stealth, and poisoning, along with training in weapons such as swords, knives, and staves.

So, while ninjas did engage in assassinations, that was not their primary function. It was mostly spying, sabotage, and planting false information with enemies.

The closest modern example I can think of would be a CIA agent.

The ninjas were very different than the samurai class.

The samurai came from the upper class of society. They were the Japanese equivalent of medieval European knights. They had a code of honor and were part of Japan’s elite.

Ninjas didn’t come from the elite. They were often quite poor. The ninjas didn’t particularly care who you were or where you came from. Women were often employed as ninjas. The women were known as kunoichi and made for excellent spies if they posed as dancers or concubines.

Even though the samurai class looked down on the ninjas, they needed the ninjas.

When engaged in a war, sometimes you needed to do things that were dishonorable and underhanded. When a situation called for such activity, the samurai relied on ninjas.

Even though the ninjas were looked down on and came from a lower class of society, they became an indispensable part of warfare in medieval Japan.

The golden age of ninjas was between 1336 and 1600. This was a tumultuous period for Japan, with constant warfare between various warlords known as daimyo.

Most daimyo hired ninjas as mercenaries, and ninjas could be found on both sides of almost every conflict.

The ninja eventually organized into two primary clans, the Iga and K?ga.

Iga and Koga were two separate, adjacent regions of Japan that specialized in the training of ninjas. The regions were hard to access, which increased the secrecy and legend of the ninjas.

There were entire villages in these areas which were dedicated to ninja training.

Training ninjas was a good business. Ninjas were mercenaries and were hired by all parties. Skilled ninjas could make a lot of money, and it was one of the best opportunities for someone poor to improve their status in life.

The Iga and Koga clans produced professional ninjas in much higher demand than run-of-the-mill spies that could be recruited from anywhere.

Within the ninja clans, there was a hierarchy. At the top was a j?nin. Below that were ch?nin, and below that were genin. These three ranks primarily held administrative and organizational roles. They were responsible for hiring and assigning ninjas to missions.

This golden age of ninjas was the period that produced the most famous ninjas.

Ishikawa Goemon was a ninja thief who robbed other warlords. He was often called the ninja Robin Hood, although there isn’t much to suggest he gave his spoils to the poor.

Hattori Hanzo is a name that might ring a bell. His name was used as a character in the Kill Bill movies. In reality, he was a leader of the Iga Clan. Stories about him having mystical powers circulated for centuries.

Mochizuki Chiyome was one of the famous female ninjas. She was responsible for recruiting and training female ninjas, and she usually found her recruits from the ranks of orphans, prostitutes, and refugees.

The golden age of the ninja came to a dramatic end in the late 16th century. The warlord Oda Nobunaga began to unify all of Japan. He managed to coopt the Koga ninja clan but couldn’t subdue the Iga clan.

So, he attacked the Iga province with overwhelming force. He used a six-pronged attack with over 40,000 men to end the Iga ninja clan.

The ninjas were not accustomed to open warfare like the samurai were, and they were easily routed. The ninjas who were not killed fled to the mountains.

Many of the surviving ninjas went into the employment of Tokugawa Ieyasu who established the Tokugawa shogunate and ended the period of civil wars that plagued Japan.

Ninjas didn’t die out after the 17th century, but their roles changed. Ninjutsu was still taught, but ninjas were hired more as bodyguards and spies, not so much as warriors. Others, not being able to find employment, were reduced to becoming bandits.

The unification of Japan didn’t require trained guerilla fighters, and as Japan closed its doors to the rest of the world, it didn’t need the ninja skills to fight foreign threats.

Ninjutsu never totally died out. It was passed along from person to person even as Japan modernized. Today, 73-year-old Jinichi Kawakami is considered to be the last ninja and the last practitioner of authentic traditional ninjutsu. He was trained by a man named Masado Ishida, who claimed to be one of the last ninjutsu practitioners.

He had one student who had taught ninjutsu but no longer takes any new students.  Kawakami has said that no one will replace him in the role of ninja master.  He has said, “In the age of civil wars or during the Edo period, ninjas’ abilities to spy and kill, or mix medicine may have been useful. But we now have guns, the internet and much better medicines, so the art of ninjutsu has no place in the modern age.”

So how much of the legend of ninjas is actually true? What is fact, and what is fiction?

Did ninjas wear black? The answer is sometimes. Black was used for camouflage and concealment when conducting infiltration at night. Commandos and special operations units today will also wear black for the same reason.

However, it was not a ninja uniform as it is portrayed in the media today. A ninja was more than likely to wear normal civilian clothes as it allowed them to blend in.

Did ninjas use throwing stars? The answer is yes, but so did the samurai. A shuriken in Japanese wasn’t just a throwing star but could also be a dagger or some other similar small weapon.

A throwing star is not a lethal weapon. Killing someone with it would be extremely difficult. Many online videos demonstrate these weapons using meat or ballistic gel. More often than not, they bounce off, and if they do stick, it would only be a small wound.

A throwing star was primarily used as a distraction to open a fight. A fighter would throw it at their opponent’s face to distract them so that they could get in an opening attack.

One way that a throwing star could be lethal if it was poisoned. Sometimes a ninja would also dip it in animal dung so that when it struck an opponent, it would create an infection in the wound.

Did ninjas use ninja swords? These are the straight swords seen in movies like Kill Bill? The answer is no. This modern invention seems to have been created in the 1960s. While ninjas would use a variety of weapons, whatever swords they had were similar to the curved katanas found in the rest of Japan.

Could ninjas disappear in a puff of smoke? No, but they did have techniques that sort of did the same thing. Instead of some sort of flash power that made smoke, they would probably throw pepper into their enemy’s eyes, which could temporarily blind them.

That being said, when gunpowder became available, ninjas would have availed themselves of it. They didn’t limit themselves to any particular weapon.

Despite Jinichi Kawakami’s decision not to have anyone follow in his footsteps, the ninjutsu tradition might still carry on in some form.

In June of 2022, the discovery of a lost book titled Kanrinseiyo was announced. The book was a compendium written by hand in 1748, and it covers 48 different types of ninjutsu.

So ninjas were real, but they were far from the mystical super warriors portrayed in TV and movies. While they were sometimes assassins, they were mostly spies, saboteurs, and propagandists.

Most of all, they were given the jobs that the samurai didn’t want to dirty their hands with.

Today’s review comes from listener Erik72 at PodcastAddict. He writes,

I’m well on my way to the completionist club, & this is the first podcast I listen to every day. The only thing that would make this podcast better is if Gary did an episode on the 1969 NFL Champion Minnesota Vikings, and the subsequent curse of the Ed Thorp Memorial Trophy. Skol.

Thanks, Erik! Unfortunately, the 1969 season fell into that very narrow gap when the Super Bowl was a thing, but the AFL and NFL hadn’t merged yet. So, technically, the Vikings won the air-quote NFL championship, yet still lost in the Super Bowl, the first of their four Super Bowl losses, 23 to 7 to the Kansas City Chiefs.

Of course, by this time, the Packers had already won two Super Bowls and 11 NFL titles.

Remember, if you leave a review or send me a boostagram, you too can have it read on the show. Also, don’t forget about the show’s new Facebook group. Just search for Everything Everywhere Daily on Facebook or click on the link in the show notes.