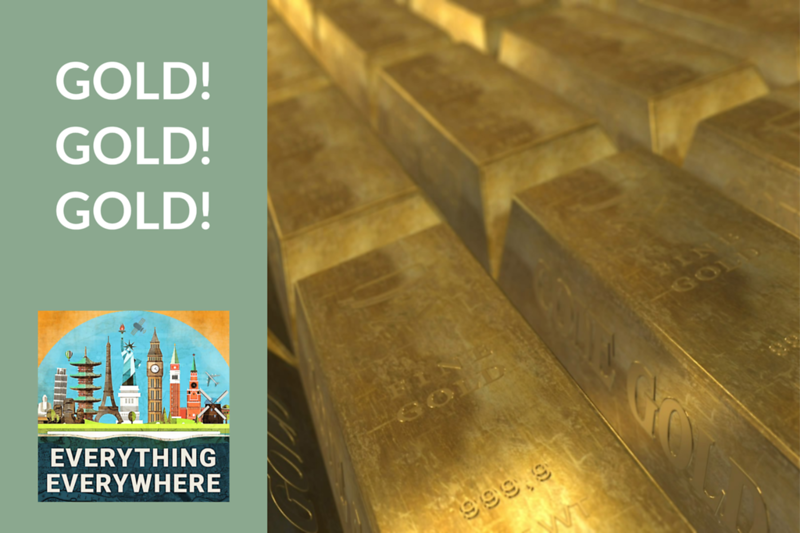 Believe it or not, one of the most valuable elements on the Periodic Table was also the first one that was discovered by humans. Since then it has held a prominent spot in almost every culture on Earth.

We use it to signify first place, we use it as a metaphor for important rules, and for thousands of years, it was the basis of money. It was even the obsession of James Bond’s greatest villain.

Learn more about gold, its physical properties, and its role in human culture, on this episode of Everything Everywhere Daily.

My audiobook recommendation today is The Power of Gold: The History of an Obsession by  Peter L. Bernstein.

Peter Bernstein tells the story of history’s most coveted, celebrated, and inglorious asset: gold. From the ancient fascinations of Moses and Midas through the modern convulsions caused by the gold standard and its aftermath, gold has led many of its most eager and proud possessors to a bad end. Gold had them, rather than the other way around.

This fascinating account begins with the magical, religious, and artistic qualities of gold and progresses to the invention of coinage, the transformation of gold into money, and the gold standard. The more important gold becomes as money, the more loudly it speaks of power. Ultimately, Bernstein confronts the future of gold in a world where it appears to have been relegated to the periphery of global finance.

I’ve done a few episodes in the past on particular elements on the periodic table. Aluminum was an extremely rare metal and unknown for much of history until it became extremely abundant in the early 20th century.

The story of Uranium is was mostly about its uses as a radioactive element.

The story of gold is altogether different from anything else. Let’s start with the physical properties of gold.

Gold as an element is heavy with an atomic weight of 79. It is somewhat rare, and brilliant colored. Perhaps most importantly gold doesn’t usually bond with anything and it is one of the least reactive chemical elements.

In the introduction, I mentioned that gold was probably the first element discovered by humans. This is because almost every other element isn’t found in its base elemental form. Common elements like iron or silicon are usually found bound to oxygen or other elements in a rock.

Gold, when found in nature, is usually just pure elemental gold. Along with silver and platinum, it is one of the only elements which is found this way.

In addition to being shiny and non-reactive, gold is also the most malleable metal element and the most ductile element.

Small bits of gold have been found in paleolithic caves dating back 40,000 years. Honestly, it should come as no surprise that it was discovered that early. It isn’t hard to see why an early human would pick up a piece of gold as it is naturally shiny and pretty.

We have found gold artifacts in the archeological record almost as far back as we’ve found artifacts from early civilizations.

Gold Egyptian artifacts have been found dating back to before the first Egyptian dynasty. When they found the tomb of King Tutankhamun they found literally one thousand five hundred kilograms of solid gold.

The reason it was such a rare find is that for centuries robbers would loot tombs looking for gold. Finding an unmolested tomb is extremely unlikely.

The Bible mentions gold all over the place. In the old testament, there was the golden calf and the Jewish temple had a golden menorah. In the New Testament, the wise men brought a gift of gold to Jesus, and of course, there is the Golden Rule.

Greek mythology had the story of King Midas who wished that everything he touched would turn to gold and had his wish granted. There actually were three kings named Midas who ruled a land called Phrygia in what is today Turkey.

Another Greek myth was about Jason and the Argonauts and the Golden Fleece. Believe it or not, this legend also may have a grain of truth. It turns out that using a sheep’s fleece was a technique used for acquiring gold.

Ornamentation and jewelry were only one of the two major uses for gold in antiquity. The other of course was money.

Gold historically made a very good basis for money. It didn’t react with anything, so you couldn’t degrade it.  It was an element, so you couldn’t destroy it. It was rare, so it was limited. And, it could also easily be melted down and divided or combined into larger or smaller lots.

The oldest gold coins that we have discovered date back 2,600 years ago from the Anatolia region of Turkey.

Not soon after, evidence of Chinese gold coins shows up as well. The ying yuan dates back to the 5th century BC, and the yuan is the name of the Chinese currency today.

In Rome, the primary gold coin was the aureus. It initially had a value of 25 silver denarii and 100 bronze sestertii.

As I’ve mentioned in previous episodes, the Romans didn’t actually have a ton of technical innovations. However, one area where they did innovate was in the area of gold mining.

They were the first to use large-scale hydraulic mining. They would literally run aqueducts to their mines and store water up above and use the water to bust up soil and rocks.

If you remember back to my episode on who was the richest person in all history if you use gold as a measure of value, then a good case can be made for the West African King Manu Musa. He had so much gold than that when he travel to Mecca on the Hajj, he destroyed the economies of the places he traveled through because he spent so much gold, prices destabilized.

Over in the New World, there were very different takes on gold.

From Mexico to the south, cultures used a great deal of gold in ornamentation and jewelry. The Aztec word for gold was literally “god excrement”. However, they didn’t use gold for money or as a unit of exchange.

In North America, there was very little use for gold. To the native people, it wasn’t seen as valuable as there was little practical application for it. Something like obsidian or copper, which could be used as a knife was far more important.

The existence of gold in the New World was one of the driving forces behind the conquest of the Americas, especially the Spanish. The primary focus of most Spanish colonies, especially initially was the extraction and exportation of gold and silver. In fact, they had an entire system set up designed to send gold from Manila to Acapulco to Vera Cruz, to Spain.

Up until the 20th century, gold was the basis for almost every monetary system in the world. Even if they used silver coins or paper currency, ultimately, it was all based on gold.  Paper money could, in theory, be converted to gold.

This system eventually disappeared in the latter half of the 20th century. The United States officially went off the gold standard in 1971.

Gold production and gold mining have never ceased, however. If anything, technology has allowed for more gold to be mined than ever before.

Approximately 75% of all gold ever produced was mined in just the last 100 years and ? of the gold since just 1950.

The total amount of gold that has been mined throughout history is estimated to be around 200 million kilograms. About 2.5 to 3 million kilograms are mined every year. The total value of all the gold in the world would be about $9.6 trillion dollars, or to put it another way, all the gold in the world is worth about the same as Apple, Amazon, Microsoft, Google, and Facebook, combined.

Given the density of gold, that doesn’t actually make for a very large volume. All the mined gold in the world, throughout history, would only fill 2 Olympic-sized swimming pools.

I’ve talked about the use of gold for money and jewelry. For thousands of years that have been the primary use of gold, and today that hasn’t changed. 90% of all gold is used either for jewelry or as a store of value.

However, there are some industrial uses of gold.

Another attribute of gold is the fact that it is very malleable. This means it can be hammered down to an extremely thin foil known as gold leaf. The average thickness of gold leaf is only 1 micrometer or 1 millionth of a meter.

The process of applying gold leaf to something is called gilding. Gilding is a common way to make something appear golden, without actually making it out of gold.

Despite what Richie Rich comic books might have taught you, sold gold anything is almost always impractical due to weight and cost.

You can actually buy gold leaf quite cheap, and the reason is that you aren’t actually getting that much gold.

Gold leaf is sometimes used as a food additive. There is pretty much no reason to ever use it other than to make something seem extravagant. Nonetheless, you can ingest gold without problem as it is non-toxic and doesn’t react with anything.

One of the other industrial uses of gold takes advantage of its ability to reflect electromagnetic radiation. It is sometimes used to coat telescope mirrors or the surfaces of high-end compact discs. The visors of helmets on space suits will often have a gold foil so thin it is translucent. Enough to reflect sunlight, but still, allow astronauts to see through.

Gold has been a subject of fascination for humans ever since we were writing on cave walls. No matter how digitized and virtual our world becomes, the fascination will gold will probably always exist.