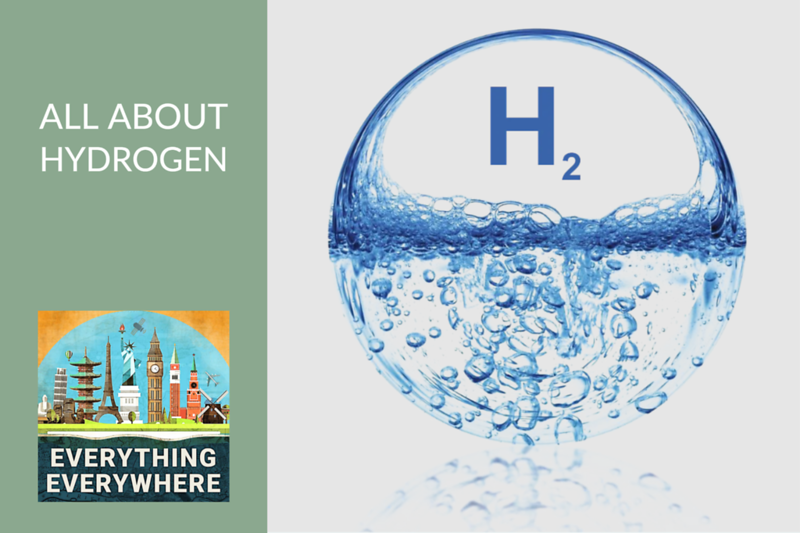 There is one substance that makes up 98% of the observable matter in the universe, yet you will almost never encounter it in its native form.

It is inside your body right now and life wouldn’t be possible without it, yet it is an extremely dangerous substance that could kill you if handled improperly.

I am of course talking about hydrogen.

Learn more about hydrogen, the lightest and most fundamental of all the elements, on this episode of Everything Everywhere Daily.

I’ve done several episodes on particular elements. All of them so far have been pretty high up on the periodic table: gold, uranium, and plutonium.

In this episode, I’m going to be going way down the periodic table to the simplest element there is. The element with the atomic number of one: hydrogen.

Based on our current understanding of the Big Bang, about 13.7 billion years ago the universe was a soup of subatomic particles. Eventually, as the universe cooled, the particles coalesced into protons, neutrons, and electrons. Those elementary particles then combined to create atoms.

The simplest possible atom is hydrogen. There is one proton and one electron.

99.98 percent of all hydrogen is this simple type without a neutron called Protium.

Hydrogen is the vast majority of everything we can see in the universe. 98% of all baryonic matter, that is all of the stuff we are familiar with, not dark matter, is hydrogen

If you get enough hydrogen in one spot, it can start to pull itself together via gravity and it will create a star.

As the mass of the hydrogen begins to compress all the hydrogen together, eventually the pressure can become so great that the hydrogen atoms will fuse together.

Because hydrogen is the lightest element, it is the easiest element to fuse. The heavier the element, the more energy is required to fuse them together.

Stellar formation is a topic of its own, and one that I will cover in its own episode because I could easily spend the rest of this episode talking about the formation and evolution of stars.

I would just note one seeming paradox about stars. The larger they are, the faster they die. The more mass they have, the greater the gravity, the higher the pressure, and the faster the rate of fusion.

Here on Earth, there is plenty of hydrogen, but most of us never experience it in its native, gaseous form.

Most hydrogen gas tends to bind with itself to form H2 or a hydrogen molecule.

The amount of hydrogen in our atmosphere is minuscule. Only 0.00005 percent of the air you breathe is hydrogen.

The reason why there is so little is simply that hydrogen is so light. If you released some hydrogen, it would immediately begin to float up because it is so much lighter than everything else.

Hydrogen is so light that it can actually escape the Earth and go into space.

I’ve mentioned several times in previous episodes that the atmosphere doesn’t simply end. It simply becomes more and more diffuse the further up you go. Even at an altitude where the International Space Station is in orbit, there are still enough molecules that if steps weren’t taken, the space station would fall out of orbit in about five years.

Most of the gas it is colliding with is hydrogen.

The hydrogen on Earth is most bound up in other molecules, primarily water.

Where hydrogen is found in other molecules outside of Earth, it is usually in the form of water, H2O, methane, CH4, or ammonia NH3.

Much of the hydrogen which is found on Earth is just shifted from one form to another via chemical processes.

Despite being the most common element in the entire universe, humans really weren’t aware of hydrogen until relatively late.

The first person who identified the gas which we would know as hydrogen was the British scientist Robert Boyle in 1671. He found a gas that was produced with iron filings was mixed with acids.

The person who identified hydrogen as its own unique gas was Henry Cavendish in 1766. He called it “inflammable air”. He believed he had discovered the mythical invisible substance known as phlogiston, which supposedly made combustible substances burn.

He was also the person who discovered that the residue from burning hydrogen, was water.

The name hydrogen was coined by the French chemist Antoine Lavoisier in 1788. The word comes from the Greek words hydro and genes, which just means “coming from water”.

One of the very first things discovered about hydrogen was its ability to be produced from water with electricity.

In 1800, Alessandro Volta, the inventor of the electric battery, found that he could create oxygen and hydrogen by passing an electrical current through water.

After the initial discovery of hydrogen, there weren’t a lot of use cases for it at first.

The first and most obvious use case was taking advantage of its lightweight and buoyancy.

The first hydrogen balloon was launched on August 27, 1783, in Paris by Jacques Charles. The hydrogen was created via chemical reactions of iron and acid, and it was captured in a silk bag covered in natural rubber mixed in turpentine.

The first hydrogen airship was built in 1852, which was actually the first regular method of air travel.

If you remember back to my episode on the zeppelin, the zeppelin corporation used hydrogen as its lifting gas for a couple of decades, flying hundreds of thousands of miles with thousands of passengers without incident.

That was of course until there was an incident, that being the Hindenberg exploding. Since then, hydrogen has never been used as a lifting gas.

However, there are companies that are reconsidering the use of hydrogen as a lifting gas. It isn’t as crazy as it sounds. Technology has come a long way since the Hindenberg disaster, and hydrogen is better as a lifting gas than helium, and it is much much much cheaper.

Chemically and industrially, probably the biggest use of hydrogen is in the process known as hydrogenation, which simply means adding hydrogen to something.

Perhaps the best-known example would be the Haber-Bosh process which adds hydrogen to nitrogen molecules to create ammonia, which is used in fertilizers.  I talked about this on my episode about Fritz Haber, and how he was one of the best and worst chemists in history.

Hydrogenation is also used in the process of making hydrocarbons. If you add hydrogen to carbon dioxide, you can make methanol.

Perhaps the biggest discussion of hydrogen recent has been around its use for energy. There has been talk of creating a hydrogen economy and creating cars and airplanes which run on hydrogen as its fuel.

Technically speaking, hydrogen isn’t really an energy source. You can’t mine or dill for hydrogen as you would for coal or petroleum.

Hydrogen is easy to produce, but you need energy to produce it. So to that extent, hydrogen is more of a means of storing energy, like a battery.

Unlike a battery, however, you don’t need heavy metals and rare earth elements to store energy. It is a fuel that can be transported.

In space, you have to bring both hydrogen and oxygen. On Earth, you don’t need to bother with the oxygen because it is in the atmosphere.

Fuel cells can be scaled up quite large. The largest fuel cell plant in the world is in South Korea. It can create 78 megawatts of power for a quarter-million people.

However, much of the talk about creating a hydrogen-based economy has been scaled back a bit. The problem has to do with the engineering problems associated with handling hydrogen.

One group of engineers tried to design a passenger jet that ran on hydrogen. They estimate it would require a tank which took up about half of the fuselage.

The problem is just how you handle hydrogen. A liquid, like gasoline, is relatively easy to handle compared to a gas like hydrogen.

If you are dealing with hydrogen in a static environment like a fuel cell for a building, it is much easier and safer than trying to handle it in a moving vehicle.

Perhaps the biggest potential of hydrogen in the future is using it as a fuel in a fusion reactor, replicating the process inside of a star, but I’ve also done an entire episode on that as well.

If you want to make your own hydrogen, it is actually really easy to do. Just connect some wires to a battery and put them in water, and hydrogen will come off of one end.

The other way, and the much more fun way, is to just dump vinegar onto baking soda. That gas that comes out of the chemical reaction is pure hydrogen gas.

In addition to producing hydrogen, it is a great way to clean a stovetop.

So even though it is all around us, we don’t really experience hydrogen directly in our everyday lives. However, if some engineering challenges can be overcome, it might very well be that the most common substance in the universe is something that we’ll use on a regular basis.

On the 8th January 2022, I listened to a podcast episode regarding ‘The Ark of the Covenant.’ I quickly found out that here was a podcast that could teach me about everything, everywhere, daily. It was then that I decided to listen from the very beginning. The length of each episode is ideal to listen to whether you’re driving around on deliveries, gardening on your allotment plot or just relaxing at the end of the day. At the time of recording this review, I still have a month’s worth of episodes to listen to. So join me and learn more about ‘Everything, Everywhere, Daily’

Thank you, Mr. Enriquez! I’m also pleased when people tell me they’ve gone through the entire back catalog of episodes. I have so many of them at this point that I should create some sort of informal club for everyone who has listened to all of the episodes.  That is about 100 hours of