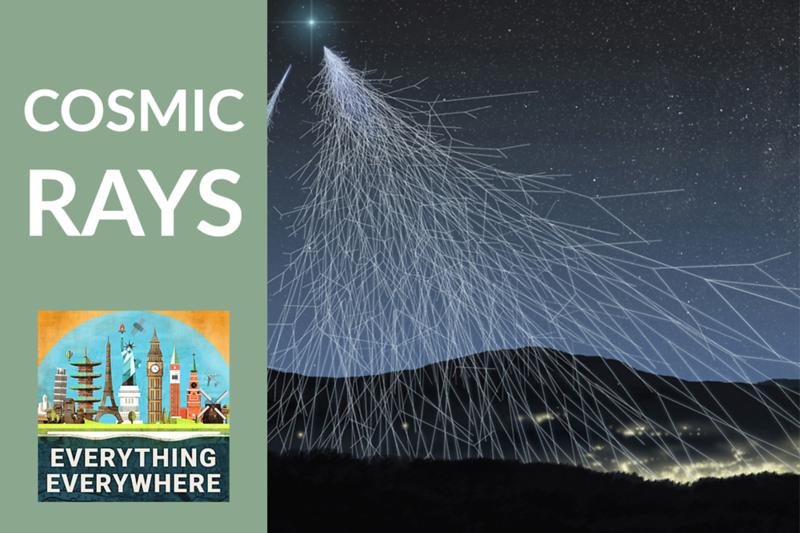 Who matter where you are right now, no matter what time you are listening to this, there is one thing that I can safely say about you right now. Your body is being bombarded with cosmic rays.

In fact, pretty much every moment of your life since you’ve been born, you’ve been hit by cosmic rays.

Learn more about cosmic rays, what they are and where they come from, on this episode of Everything Everywhere Daily.

Radiation was first discovered in 1896 by French physicist Henri Becquerel when he famously put photographic plates in a drawer with uranium.

Subsequent experiments done by the likes of Marie Curie and others showed that radiation was a property that came from certain substances. Rocks with radioactive elements were thought to be where radiation came from.

In 1909, German physicist and Jesuit priest Theodor Wulf created an electrometer which was sealed in an air-tight container. An electrometer is a simple device with two gold foil leaves.

He took his electrometer to the top of the Eiffel Tower and surprisingly found out that there was more radiation at the top than there was at the bottom. Based on the current theory of radiation at the time, this observation made absolutely no sense.

If radiation came from rocks, then there should be less the further you got away from the ground, not more.

He made three, more advanced electrometers and took them with him in a hot air balloon. He went up to 5,300 meters or 17,000 feet and found that the radiation was four times higher than it was on the ground.

At first, he thought that it must have been coming from the sun, so he did another balloon flight at night and another during a solar eclipse and found the same thing.

He concluded that high-powered radiation was entering our atmosphere from space.

Hess was awarded the Nobel Prize in Physics in 1936 for his discoveries.

The term “cosmic ray” was coined by American physicist Robert Millikan who ran tests to measure the amount of ionization at very high elevations with automated electrometers in balloons, as well as far below sea level.

The term “cosmic ray” is actually a misnomer, as I’ll explain in a bit, as the term “ray” implied light. At first, it was thought that cosmic rays were high-energy photons like gamma rays.

More discoveries were soon made about this mysterious radiation from the heavens.

In 1927 it was found that cosmic radiation was lower at lower latitudes, and higher at higher latitudes. This indicated that it wasn’t photons at all, but rather charged particles that were being deflected by the Earth’s magnetic field.

In 1929, it was found that cosmic rays could penetrate 4.1 centimeters of gold. Gold is very dense and good at blocking most radiation. If something could get through that much gold, it had to have a lot of energy behind it.

In 1930, an Italian physicist named Bruno Rossi predicted that if the particles were charged, then we should see a difference in the intensity of cosmic rays based on the direction they came from. Sure enough, it was found that cosmic rays coming from the west were stronger than those coming from the east, again, due to the polarity of the Earth’s magnetic field.

So, then if cosmic rays aren’t photons as original thought, then what are they?

What we know is that 99% of cosmic rays are atomic nuclei. 90% are protons, which are nuclei of hydrogen atoms, and 9% are the nuclei of helium atoms. If you remember back to my episode on radiation 101, helium nuclei are known as alpha radiation.

The remaining 1% are electrons, which is also known as beta radiation, as well as a very small number of antimatter particles that hit the atmosphere as well as nuclei of heavier elements.

The other thing we know is that they have a lot of energy. The highest energies observed in a cosmic ray particle have been 3.2 × 1020 electronvolts.

An electronvolt is a unit of energy used for subatomic particles, so it isn’t something that you can relate to in everyday life. So to put that into perspective, the most powerful cosmic rays are 40 times more powerful than the particles in the Large Hadron Collider in Switzerland.

Or, to put it into an even better real-world example, a single subatomic particle can have the same energy as a baseball being thrown at 56 miles per hour.

You might be wondering why you never feel like you are getting hit by a 56 mile per hour baseball all the time?

First, most particles don’t make it to the surface of the Earth. They will hit air molecules in the atmosphere and start a cascade of other particles which rain down on the surface.

Second, if one did hit you, you wouldn’t really notice because it would go right through you. In fact, there is a good chance some cosmic particle went through your body since this episode started, and I’m not even talking about neutrino, which is a whole other episode, and trillions of them have passed through you in that same amount of time.

You might be wondering, is this dangerous? Well, as I mentioned in my previous episode, this is radiation. Cosmic rays are probably the single biggest source of radiation most people experience in their lives.

If you live at a higher altitude, let’s say Denver or Quito, Ecuador, you’ll have more radiation exposure than someone who lives at sea level.

Likewise, flying in an airplane will increase your radiation exposure due to cosmic rays. Your level of exposure will primarily depend on how much you fly and at what altitude you fly.

For the most part, cosmic rays pose no health threat. All life forms throughout history have been exposed to cosmic rays and we evolved for our DNA to repair low-level radiation damage.

One thing that can be damaged by cosmic rays is computers. If a particle hits the right part of a processor or memory, it can flip a bit, causing an error.

In 2003, there was an election in Belgium that was conducted electronically. The results were more than the number of votes cast. In an audit checking the paper ballots also cast, found that the error perfectly corresponded to a single bit in a single computer, which could only have been caused by a stray cosmic ray particle.

This is why computers on spacecraft have so much redundancy. The space shuttles had to have triple redundancy for exactly this reason.

The issue of cosmic rays is also a huge consideration for long-term space flight. The only time humans have ever been outside of the Earth’s magnetic field was during the Apollo missions, and that was only briefly.

The issue of cosmic rays is a considerable one that needs to be considered for any mission to Mars. One proposal is to surround a ship with water, which would stop most cosmic rays. The problem is that water is heavy, and either we would need to get it from the moon or from Earth.

There is one thing, one big thing, I haven’t mentioned yet. Where exactly do cosmic rays come from? Sure, they come from “space”, but where exactly in space?

The truth is, no one really knows. You can’t just detect the direction a particle is coming from because they are so easily influenced by magnetic or gravitational fields.

Not just the gravity and magnetism of Earth, but also that of the Sun, or even possibly the galactic center. The particles which are flying around space may come from other stars, the center of our galaxy, or even other galaxies.

Once a particle is jettisoned, it can basically travel forever until it runs into something. The smallest change in its trajectory will render its origin impossible to determine.

There are many theories about where they come from, but it is very difficult to actually prove anything.

Cosmic Rays are all around us all the time and always have been. There really isn’t anything you can do about them, and so long as you remain on Earth, it isn’t really anything to worry about.

However, if you are traveling in interplanetary space, it is probably something you will want to consider.