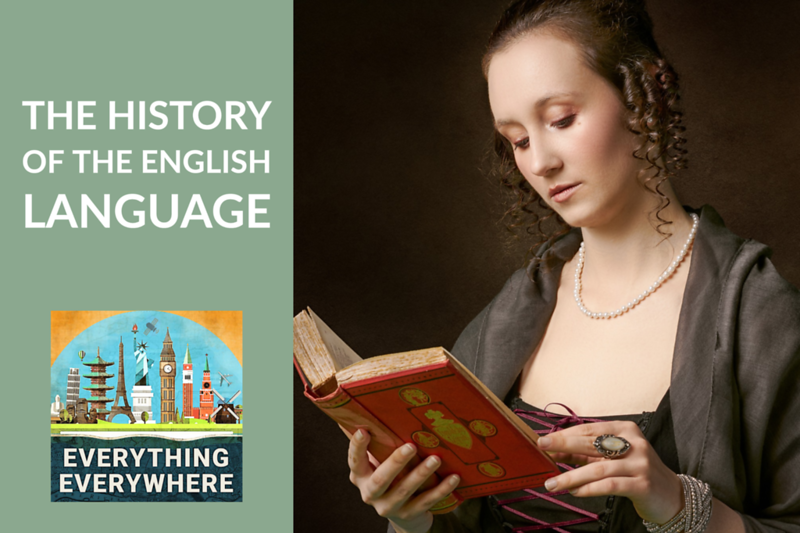 About 1500 years ago, a group of people that we would now call Vikings landed in what we now call England, and created a language we now call Old English.

Fast-forward to today, and people from 140 countries are listening to a daily podcast about random stuff, in a dialect, we call American English.

How did some ancient nordic invaders lead to a language which is now spoken on all seven continents?

Learn more about the history of the English language on this episode of Everything Everywhere Daily.

My audiobook recommendation today is Our Magnificent Bastard Tongue: The Untold History of English by John McWhorter.

Covering such turning points as the Viking raids and the Norman Conquest, and the Germanic invasions that started it all during the fifth century A.D., John McWhorter narrates this colorful evolution with vigor.

Drawing on revolutionary genetic and linguistic research, as well as a cache of remarkable trivia about the origins of English words and syntax patterns, McWhorter ultimately demonstrates the arbitrary, maddening nature of English – and its ironic simplicity due to its role as a streamlined lingua franca during the early formation of Britain.

Of the thousands of you listening to my words right now, I don’t really know much of anything about any of you. I don’t know where you are, your age, sex, occupation, or even the device you are listening to this on.

However, there is one thing I do know. I know that everyone listening to this speaks English to some extent. Whether it’s your first language or a second language, to some degree you speak English.

Most people who speak English have never really given the origins of the language any thought, other than maybe the fact that it came from England.

English, to the surprise of many people, is a Germanic language.

Its roots come from the waves of nordic people who migrated to England from the area which is now Denmark, Northern Germany, and Northern Netherlands.

These people came from tribes called the Angles, Saxons, and the Jutes. The names of these Germanic tribes are where the term Anglo-Saxon comes from.

They basically filled the vacuum which was left after the collapse of the Roman empire in Britain.

They all had different dialects of Anglo-Fresian, Fresia being the northern part of the Netherlands.

Over time, as all these people intermarried, they developed a language which we know as Old English.

This was very much a Germanic language with only a few words from Latin, which came into use from the adoption of Christianity.

Most English speakers today would not be able to understand Old English at all. To give you an idea of what it’s like, here are the first few lines of the Lord’s Prayer in Old English.

Yeah, it’s basically a foreign language. You might be able to figure out bits and pieces, but it is a far cry from the language we know today.

The next big change in the language occurred in the year 1066 with the Norman Invasion of England.

The language which the Normans brought to England was Norman, which was a form of Old French with some Old Norse words which were mixed in.

The Norman royalty didn’t bother to speak the language of the locals. The court of the English crown basically spoke this Old French dialect for several centuries. Some kings of England did learn English, but they learned it as a second language, not as a primary language.

The fact that the king and his court spoke French meant that if you wanted a place at court, you needed to speak it too. That meant that the nobility, most of whom were Norman, were speaking French. The words from the romance language, all originally based on Latin, began seeping into the English language of the common people.

From the Norman Conquest until about the year 1500, you saw the rise of what became known as Middle English.

Middle English saw major changes in grammar, vocabulary, and pronunciation. The Latin-based words of the nobility heavily influenced the development of English.

Middle English was the language of Chaucer and the Canterbury Tales. Middle English can sort of be deciphered by speakers of Modern English. Much easier than Old English, but it would still take some effort.

The first King of England who actually spoke English as a first language was believed to be Henry IV, and he would have spoken Middle English.

The beginnings of Modern English began with what is known as the Great Vowel Shift. This was a large change in the pronunciations of words.

For example, the word meat went from being pronounced “met” to “mate” to finally “meet”.

The word boot used to be pronounced “boat”.

The word bite was original “beet” then “bait” and then finally “bite”.

By the early 16th Century, the language had evolved into something which you could recognize today. This is known as Early Modern English. This is the English of Shakespeare. Some of the words are a bit archaic but other than some “thees” and “thous”, it is most comprehensible.

The fully modern English that we know today can be considered to have arrived around the 18th century. Dictionaries published from that period could still be mostly used today.

Around the time that modern English was developing, something happened on the geopolitical stage. England became a really big deal.

The British Empire began taking over the world, and they took English with them. English went from an odd language spoken on an island off the coast of Europe to a truly global language.

In some countries, they brought English speakers with them, like Australia and the United States, where the language took on a life of its own.

In other countries, English was used by the educated elite in the country and oftentimes served as a universal language for large countries like India, where there were dozens of languages otherwise spoken.

Empires rise and fall, however. Just because a country and a language might dominate at one point doesn’t mean it will be so forever. Latin and French were once the languages of diplomacy and commerce in Europe, and both of them eventually fell out of favor.

As the British Empire waned in the 20th century, it just so happened that the country which replaced them also happened to speak the same language. The United States.

This timing of passing the global hegemon torch from Britain to the United States also happened at the same time when electronic communication and mass media was taking off.

English was the dominant language for motion pictures and popular music. Post-war organizations adopted English as their working language. The International Civil Aviation Organisation recommends that all air traffic control communications be done in English, and almost all international flights are.

The day-to-day working languages of most international bodies is English, including the European Union and the European Bank, even though the UK is no longer a member.

Today English is the widest spoken language in the world, although it doesn’t have the largest population of people who speak it as a first language. There are more English speakers than Mandarin, and the vast majority of Mandarin speakers are only in one country: China.

It is followed by Pakistan, Nigeria, and the Philippines.

The United Kingdom has only the sixth-largest English-speaking population.

In Europe alone, many countries now have over 50% of their population that speaks English. These include Germany, Belgium, the Netherlands, Sweden, Norway, Finland, Norway, Switzerland, Slovenia, Greece, and Estonia.

Unlike some other languages like French, there is no academy or organization which oversees English. It is a totally organic language. One result of this is that the language keeps evolving, and it is also affecting other languages as English words and idioms popup in the native language.

This can result in hybrid Englishes around the world. In Singapore, Chinese and English are often used together to form what is called Singlish. Likewise, in Germany, you can hear people speaking Denglish.

The influence goes both ways. Other countries where English is spoken will add words and phrases to English that might not otherwise exist in English. Schadenfreude is a recent adoption from German, and I’ve encountered the use of the word “kindly” instead of “please” in many countries, which came from India.

English has developed into a global language mostly by historical accident.

However, how good is it as a global language?

It has its pluses and its minuses.

On the plus side, it is a very forgiving language. There is no correct accent. An Indian or Caribbean accent is just as valid as a Canadian or Australian accent. Simplified English can be very easy to learn. There is an entire other Wikipedia that exists just for simplified English.

There are no genders. Instead of memorizing if a word is masculine, feminine, or neuter, as in German, in English, everything noun just uses “the” or “a”.

English is really a marriage of Germanic and Romance languages. Although it has Germanic roots, over half of the words in English have a Latin root, usually by way of French. If you speak a Romance or Germanic language, there is probably something in English that you can recognize.

On the downside, the hodgepodge nature of English means there are a lot of things about the language that makes absolutely no sense. The words “enough” and “stuff” rhyme yet are spelled totally differently. We have silent “p’s” in words like psychiatry.

I was researching a possible episode on spelling bees, only to be shocked to find out that most of the world doesn’t have spelling bees. They don’t need to because their languages just make sense, and everything is spelled how it sounds.

So, while basic English might be easy to pick up, mastering it can be very difficult.

What does the future hold for English?

Likewise, the number of people who are in some stage of learning English in China, usually well below fluency, is believed to be as high as 200 million. In a few decades, it is possible that China could have the largest number of English speakers in the world.

English has achieved an escape velocity where it is now well beyond the control of countries that gave it birth. If a Norwegian is talking to a Korean while on vacation in Dubai, they will almost certainly be speaking English.

It could be that in 100 years or more, the global language isn’t English, but rather something which was based on English, in the same way, the Old and Middle English were the precursors to the language we have today.