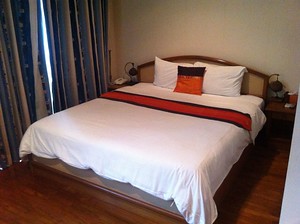 I have spent well over 1,000 nights in hotel rooms since 2007. You could say I’ve become a minor expert on the subject of hotel accommodations.

Many of the things I look for in a room are not the things that most hoteliers seems to care about. There seems to be an obsession amongst some high end hotels with the thread count of their sheets and the number of pillows they can put on a bed. I don’t think these really matter to most people.

Regardless if you are a business traveler or traveling with a family on vacation, it is necessary for modern hotels to have certain amenities to cater to the 21st Century Traveler.

Every room has a shower. Many have a shower/tub comb. Not many rooms, however, have a dedicated bathtub. I’m a bath guy. I often am forced to go weeks or longer without taking a bath and just letting my body soak in water.

I had a very memorable room once in Seminyak, Bali. What still sticks out in my mind is the giant stone bathtub that I had. I could literally lie down in the tub and not touch the sides.

This is one of the first things I check whenever I walk into a hotel room for the first time. If it has a tub, it will get instant bonus points in my book.

Everyone complains about paying for wifi at hotels. It is also an open secret that you are more likely to find free wifi at cheaper hotels than you will at higher end hotels.

However, I would have no problem paying for wifi IF the internet connection was actually good. More often than not, however, the quality of the connection is horrible. Usually, the quality is inversely related to how much you pay.

The biggest problem in most hotels is that the speeds slow down dramatically in the evening when everyone is in their rooms surfing. Most hotels don’t have enough bandwidth to service all their guests at the same time.

I’m dying to actually find a hotel somewhere in the world that uses the quality of their bandwidth as a selling point.

How many times have you been in a hotel room only to have to push furniture around to find a power outlet? Or you put your laptop down on the desk only to find the outlet is either a) full, or b) other another wall?

I’ve also been in a few rooms that have USB ports so you can power up your smartphones without the need for an actual electrical plug.

My advice to hotels: have lots of outlets and get them up off the floor.

I’ve stayed in too many rooms that either had sealed windows or windows that didn’t open far enough. Fresh air is important. Take a shower and you whole room can feel wet from the steam if you can’t open up a window. Moreover, I really dislike air conditioning and trying to avoid it whenever possible.

My favorite rooms have full blown patio doors to maximize the amount of air flow.

Magnetic strip key cards piss me off. Hardly a day can go by where I don’t find my keys demagnetized. My cell phone can do it. My iPad can do it (the case attaches to the unit via a magnet). I even had some reason to believe that other cards can do it.

The cards with embedded chips are far superior to the magnetic strips. Likewise, the RFID cards where you only have to touch the card to the door are even better.

I wish hotels start to transition away from the magnets. It would save so many headaches.

Ideally in the future, it would be great if you could use your smart phone with NFC to open your door. That would be cool.

A Proper Desk and Quality Chair

Most hotel rooms have something which passes for a desk. Sadly, too many of them are designed for a 19th Century world of letter writing, not a 21st Century world of laptop computers. I’m still seeing too many desk pads, notepads and pens. Also, I really don’t like glass desktops. I understand why the have them, but they don’t work with optical mice.

Most importantly, however, most desks and chairs just aren’t very comfortable and conducive to working. Most chairs seem like something you’d see in a 50’s Catholic High School.

Everyone has their own personal list of things they look for in a hotel room. What are the things you look for?

1 thought on “6 Things that Make a Great Hotel Room”