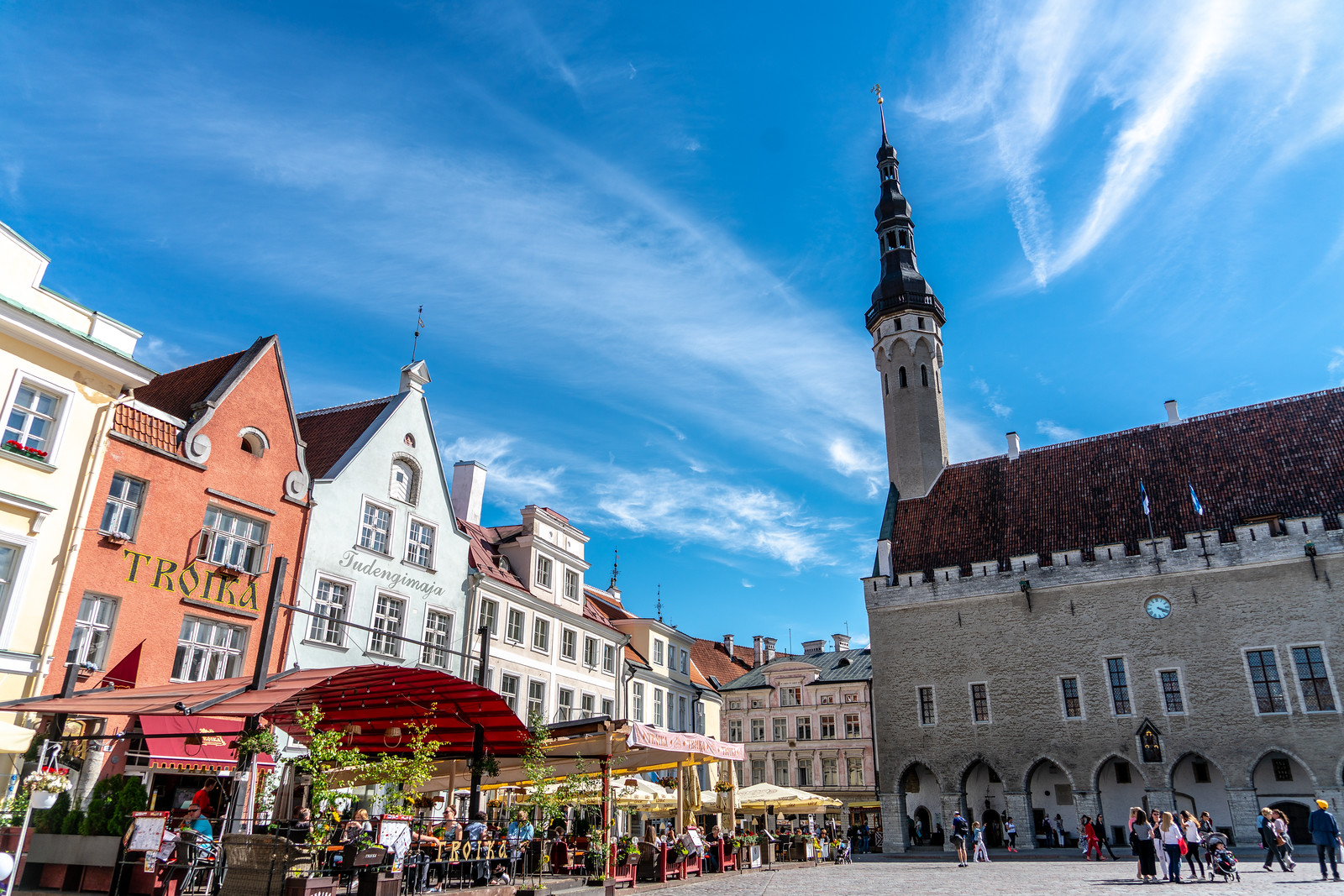 This summer I traveled to the Baltic States with G Adventures. (Disclosure: I was G Adventures ambassador.)

The Baltic countries of Estonia, Latvia, and Lithuania were some of the last places in Europe I had yet to visit. I had always been intrigued by these small countries which seemed to share so much in common, yet were different places. One of the primary goals I had on the trip was to find out what made each country different and what they shared in common. During the trip, we were able to explore the highlights of each country and I developed a much better understanding of what makes each country unique.

Lithuania is the largest of the three countries which are considered the Baltic States. Given its location as the southernmost of the Baltic States, it has a history which is more closely tied to Poland and Ukraine. The modern state of Lithuania is actually tiny compared to the historical Grand Duchy of Lithuania which existed from the 13th Century and was dissolved in 1795 after the Ko?ciuszko Uprising. The original Grand Duchy of Lithuania consisted of parts of what is today Poland, Belarus, Russia, Latvia, and Ukraine.

The modern state of Lithuania was created in 1918 at the end of WWI and celebrated its 100th anniversary in 2018. All 3 of the Baltic States share the same year of founding: 1918. Despite achieving independence in the early 90’s from the Soviet Union, all of the Baltic States consider the period from 1939 to 1990 as the “Soviet Occupation” and not the creation of a new country.

Lithuania differs from the other three Baltic States in that it is a Catholic country, whereas Latvia and Estonia are Protestant. This is due to the fact that Lithuania was traditionally linked to Catholic Poland, whereas the other countries were more linked via sea trade to the Protestant Hanseatic League.

The Lithuanian language, along with Latvian, is the only living Baltic language in the world. It is considered to be the oldest European language which is still spoken. Despite being in the same language family, Lithuanian and Latvian are mutually unintelligible. During the tour, I didn’t meet a single person who spoke both Lithuanian and Latvian (although I am sure such people exist). The common tongue for most people would be Russian, which is a holdover from the Soviet Era, and a reflection of the dominance Russia has over the region.

FUN FACT: If you have a hard time remembering which country is which, they are in alphabetical order from north to south: Estonia, Latvia, and Lithuania!

Vilnius, the capital of Lithuania, is the only capital of the 3 Baltic countries which is landlocked. It is actually closer to Minsk than it is to Riga. As with all three of the Baltic capitals, it is a UNESCO World Heritage Site. I found Vilnius to have a much more ‘hippie’ vibe than Riga or Tallinn did. This is embodied in the self-proclaimed Republic of Užupis which is in the middle of town.

Užupis is a neighborhood in Vilnius which declared itself independent on April 1, 1997 (April Fool’s Day). They have their own currency, flag and had an 11 man army (all of whom have since retired). The constitution of Užupis is posted in 23 languages on metal plates in the neighborhood. The constitution consists of 43 different points ranging from the serious (#19 Everyone has the right to have faith) to the absurd (#12 A dog as the right to be a dog).

Another notable area of Vilnius is literat? gatv? (aka Literature Street). It is a short street with small plaques embedded into a wall honoring notable Lithuanian writers.

The majority of Vilnius has the feel of a Central European city such as what you might find in Poland, Hungary or the Czech Republic. Other major attractions in Vilnius of a historic nature include:

Located approximately 21 kilometers (13 miles) from the old town of Vilnius is the town of Trakai and the nearby Trakai Historical Park. The town is a popular tourist destination for locals from Vilnius and the location of Trakai Island Castle, the centerpiece for the town.

Today the castle is a museum and is connected to the mainland via a bridge.

During the summer the entire area around Trakai is a tourist destination with many restaurants, boat tours, and shops. It was one of the most picturesque spots we visited on the entire trip and one where we saw very few foreign tourists other than ourselves.

If I had one recommendation for people visiting Vilnius, it would be to take a day trip to Trakai. It is easily accessible by public transportation with regularly running buses. There is a moderate walk from the bus station to the castle, but it shouldn’t be a problem for most people.

Although Lithuania is a Baltic country, as mentioned above, its capital is not on the coast, and it also has the shortest coastline of the three countries. Also, most of the short Lithuanian coast consists of the Curonian Spit, which is a large sandbar which runs from Klaipeda to the Russian Kaliningrad Border.

We stayed in the town of Nida which is near the southernmost end of the Lithuanian part of the spit. It is only 3 kilometers from the Russian border.

The spit is known as an ecological reserve with a unique ecosystem mostly consisting of sand, grass and pine trees. The seaside of the spit has very rough seas and the lagoon side is incredibly calm. The spit is also a great place for cycling as the terrane is relatively flat and straight. We did a 30km bike trip one of the days we were there where we were able to see and explore much of the spit along the way.

This area is also near some of the top places for amber production. There are several shops you can find with sell amber products and will also give a great background on how amber was created and how it is used in jewelry.

I should also make note that Nida had some of the best smoked fish I have ever had in my travels. One restaurant we visited specialized in smoked fish where you could select the fish you wanted right off of the smoker rack.

DID YOU KNOW you can travel on the exact same trip I did with G Adventures? Click to find out more.

Latvia is where it really hit home how different the Baltic states were. While there certainly are similarities between Latvia and Lithuania, there are profound differences. Whereas Lithuania had the feel of a Central European country, Latvia had the feel of a Northern European country. It is a subtle distinction that you probably might not recognize if you haven’t traveled extensively in Europe.

Latvia also took a different route after the fall of the Soviet Union. In 1991 after re-establishing their independence, Latvia denied citizenship to ethnic Russians who moved to Latvia during the Soviet period. Today there are approximately a quarter million ethnic Russians in Latvia who have lived there their whole lives who cannot vote. They are given special “non-citizen” passports which let them travel as they would under a Latvian passport, but otherwise locks them out of voting and running for elective office.

The difference between Riga and Vilnius I think is pretty evident and comes from the fact that Vilnius isn’t a port city and Riga is. This means that Riga historically had more access and influence from the rest of the world, especially the Hanseatic League cities on the Baltic. This is why Riga and Latvia became Protestant and why Lithuania remained Catholic.

This openness also is manifest in the architecture of the city. Riga is known for a spectacular Art Nouveau neighborhoods. About 1/3 of the buildings in central Riga are of an Art Nouveau style which were built between 1890 and 1910.

Other attractions to see in Riga:

The last country on the tour was different yet again from Latvia and Lithuania. Rather than having a Central or Northern European vibe, I got a quasi Scandinavian vibe from Estonia. Both in the cities and in the countryside it was telling that Estonia had a slightly different orientation than the other Baltic countries. The Estonian language is closer to Finnish than Latvian or Lithuanian, which makes sense given its close proximity to Helsinki across the Gulf of Finland.

Our first stop in Estonia, the longest stop on the tour, was on the island of Saaremaa. To be honest, I had never really heard of Saaremaa before the trip and I knew nothing about it. It isn’t a big stop for foreign tourists, but it is well known to Estonians as it is the largest island in the country. The island is mostly rural with the city of Kuressaare being the main exception and capital of the region.

Not having known what to expect before I arrived, the experience on the island was a pleasant surprise. Some of the highlights of the island were:

We also arrived on Saaremaa on midsummer and were able to participate with locals with their bonfires celebrations.

Tallinn was without question my favorite city we visited on the tour, and also the busiest. It is a popular stop for cruise ships which makes the old town a very busy place during the middle of the day. It overwhelmingly had more tourist than any of the other stops on our tour (mainly due to cruise ships). The feel the city was

There are several notable attractions in Tallinn:

I had a blast on my trip to the Baltic States and I will most certainly be returning at some point in the future. I might be going in the winter someday so I can see a different side of the region and explore things which are not available during the summer.

If you are interested in exploring the Baltic States, click to see how you can see the exact same sites with G Adventures.

Read my comprehensive review of G Adventures after having been with them on 14 tours.